Grand Deepotsav Celebrations Begin In Ayodhya Ahead Of Diwali

Ayodhya Deepotsav 2020: Soon after landing in Ayodhya, the Governor and the Chief Minister offered prayers to Lord Ram and later welcomed actors representing Lord Ram, Goddess Sita and Lakshman who descended on the Saryu bank in a 'pushpak viman' - a helicopter. 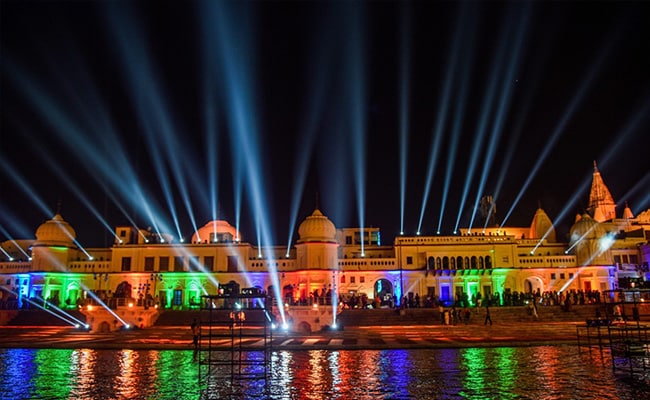 Deepotsav celebrations began today in the holy city of Ayodhya in the presence of Uttar Pradesh Governor Anandiben Patel and Chief Minister Yogi Adityanath, a Diwali event which will also see the lighting of a record 5.51 lakh earthen lamps at dusk.

Soon after landing in Ayodhya, the Governor and the Chief Minister offered prayers to Lord Ram and later welcomed actors representing Lord Ram, Goddess Sita and Lakshman who descended on the Saryu bank in a 'pushpak viman' - a helicopter.

With a view to ensuring a global recognition and identity to Ayodhya, Yogi Adityanath has initiated a number of works in the temple town including Deepotsav being organised on the occasion of Diwali every year.

Since the formation of the Yogi Adityanath government in Uttar Pradesh, many events have been organised, from Deepotsav to Ram Leela, which have earned a new identity to Ayodhya globally, a government spokesman said today.

Giving an account of the works in temple town, he said apart from setting up of Navya Ayodhya as the coordinated model of Vedic and modern city, the grandest and divine temple of Lord Ram, a statue of the Hindu deity, which would be the world's tallest, is set to leave an indelible impression on the people of the world. Some work is in progress and many are planned, the spokesman said.

The state and central governments have opened the coffers for Ayodhya's development projects like doubling of the railway line coming to Ayodhya besides, the expansion and beautification of railway station keeping in mind the future requirements, according to the spokesman.

A four-lane road from Ayodhya to Sultanpur National Highway NH 330 to the airport is to be renovated at a cost of Rs 18.75 crore. The National Highways Authority is making a proposal for construction of a bypass for Ayodhya Dham from Sohawal to Vikramjot. The work of widening of the four-lane road from Rae Bareli to Ayodhya is also to be done at a cost of about Rs 1,500 crore, he said.

Recently, at a review meeting of the tourism department, the chief minister had said that to make Ayodhya a global city for tourism, a consultant has to be zeroed in on accordingly. To maintain the flow and state of cleanliness of the Saryu river, a modern sewage treatment plant (STP) is also to be set up here, the spokesman said.

Works worth hundreds of crores of rupees are being done in Ayodhya, he added.