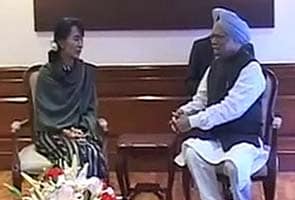 Her meeting  with Dr Singh lasted for half-an-hour following which they met without aides. Officials sources say the two discussed a variety of issues including the national reconciliation process underway in Myanmar and the process of democratisation in this context. They agreed that people-to-people relations were important. There was also a discussion about greater cooperation between the parliaments and judiciaries in the two countries.

Dr Singh said, "...our good wishes are with you as indeed with your struggle for democracy. We admire you for the indomitable courage you have shown"

Ms Suu Kyi, who arrived yesterday, is on a six-day visit to India during which she will meet various leaders of the country.

She will also visit her alma mater, Lady Sri Ram College in New Delhi, where she will interact with the faculty and the students.The Nobel prize winner spent her formative years in India when her mother was the country's ambassador to India and Nepal.  She studied at the Convent of Jesus and Mary School and graduated in political science from Lady Shri Ram College.

Ms Suu Kyi began her day today by paying homage to Mahatma Gandhi at Rajghat. She then visited Shantivan to pay tribute to Jawaharlal Nehru. Later in the day, she will deliver the Nehru Memorial Lecture on the occasion of the former PM's birth anniversary.

"People keep asking me about my expectations. My visit is an attempt to strengthen ties between the two countries. There are things in India that have changed and some that haven't changed. I am glad some things haven't changed since years. If I have expectations from the Indian government, I will not tell it to the media," Ms Suu Kyi, who is an inspiration for those fighting oppressive regimes around the world, told reporters this morning.

Ms Suu Kyi is Myanmar's opposition leader and the chairperson of the National League of Democracy of Myanmar. Her visit to India is part of India's engagement with the multi-party polity in Myanmar. During her nearly week-long stay, she will also meet Vice President Hamid Ansari, Lok Sabha Speaker Meira Kumar, Congress president Sonia Gandhi and External Affairs Minister Salman Khurshid.

She will also visit the Energy and Resources Institute (TERI) in Gurgaon before flying to Bangalore, where she will visit the Indian Institute of Science and the Infosys campus. She is also scheduled to tour rural areas in Andhra Pradesh to gain a first-hand experience of rural development and women's empowerment programmes being undertaken in India.

India awarded Suu Kyi the Jawaharlal Nehru Award for International Understanding in 1992 while she was under house arrest under the military government in Myanmar.


(With Inputs from Agencies)