Assam flood news: The number of deaths due to flood-related incidents in the state have climbed to 93. Over 28 lakh people have been affected. Goalpara is the worst-hit with over 4.7 lakh people affected. 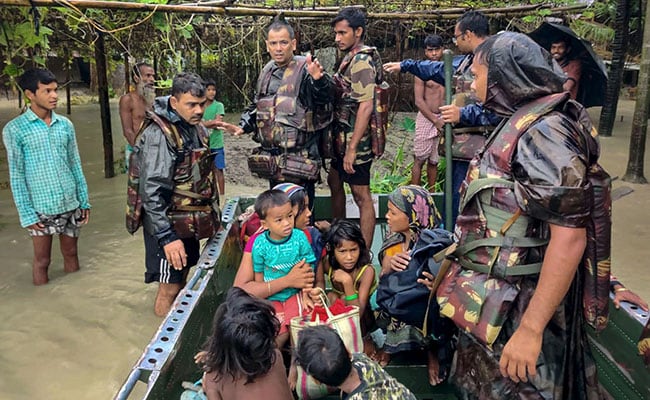 Normal life has been disrupted in large parts of Assam due to severe flooding. The number of deaths due to flood-related incidents have climbed to 93 in the state and over 28 lakh people have been affected. Goalpara is the worst-hit with over 4.7 lakh people affected.

In Sonitpur and Nagaon districts of the state, flood waters have washed away homes of hundreds of people. The State and National Disaster Relief Force are carrying are moving stranded people to safety.

#WATCH Assam: Normal life has been disrupted in Sonitpur due to floods in the region. pic.twitter.com/3yNSJ8MXWN

Chief Minister Sarbananda Sonowal visited the areas affected by the deluge in Darrang and Kamrup districts. Governor Jagdish Mukhi also conducted an aerial survey of the flood-hit areas and said that he would request the Centre to find a permanent solution to the state's yearly monsoon misery.

According to the satellite imagery, there is dense cloud cover over parts of Bihar and adjoining Uttar Pradesh, Chhattisgarh, Jharkhand, northeast and south Odisha. West Bengal and northeastern states of Nagaland, Manipur, Mizoram and Assam are likely to get heavy rain in the next few days, the Met office said.

The Brahmaputra, Dhansiri, Jia Bharali, Kopili and Beki rivers are flowing above the danger level in several districts.

Assam's environment and forest minister, Parimal Suklabaidya said, though large parts of the famous Kaziranga National Park have been inundated, animal deaths are less than that of last year. "This is the third wave of flood in Assam and it is a recurring problem in the state. Compared to 2019, this year's casualty of wildlife is less. Last year, we rescued 169 animals while this year we have rescued 143 from Kaziranga," Mr Parimal said.