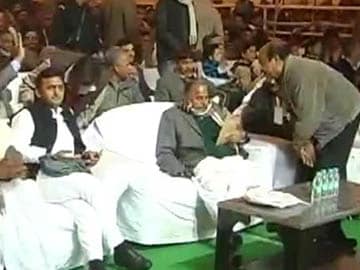 Lucknow: Bollywood stars Salman Khan and Madhuri Dixit will perform at the 'Saifai Mahotsav' on Wednesday evening in Uttar Pradesh Chief Minister Akhilesh Yadav's hometown, bringing down curtains on an event that has been criticized for its glamour and extravagance at a time the state is struggling to rehabilitate riot-hit families in Muzaffarnagar. (Read)

Wary of criticism from the media, organizing committee chairman Dharmendra Yadav, who is Samajwadi Party president Mulayam Singh Yadav's nephew, said reporters would be allowed into the finale, but barred them from carrying their cameras, to prevent live telecast.

The festival, part of an annual ritual at Mr Yadav's ancestral village in Etawah district, is into its 15th edition now, but it has come under heavy shelling from the Opposition parties as it was held against the backdrop of the controversy over the relief camps for Muzaffarnagar riot victims, and their plight. As many as 34 children are reported to have died in these temporary shelters after failing to withstand the bitter cold that has swept the region. The state government has drawn flak for trying to drive the inmates of these camps back to their homes.

"While children are dying daily in these camps, Yadav is organizing Saifai Mahotsav, with shows by dancers from foreign countries," Union Steel Minister Beni Prasad Yadav told reporters on December 29, after his attention was drawn to reports about Mr Yadav, and his father Mulayam Singh, flying to Saifai to participate in the festival.

The BSP, too, slammed the state government for its decision to go ahead with the annual festival, held every winter in Uttar Pradesh's most pampered village. "They have lost all human values as they are celebrating at a time when so many kids have died in Muzaffarnagar," BSP leader Sudhindra Bhadoria said.

Promoted
Listen to the latest songs, only on JioSaavn.com
SP leaders, however, remain defiant, and continue to defend the festival. "I want to clarify again that UP government has conducted Saifai Mahotsav to promote arts and culture," state cabinet minister Rajendra Chaudhary said today. In an interview to NDTV earlier this week, the UP chief minister had justified the decision to hold the lavish show, arguing that it was an annual affair which provided jobs to the locals.

Organisers of the 14-day carnival are tightlipped about the budget, but critics have panned it for drawing heavily from the state's coffers. Besides Khan and Dixit, music composers Sajid-Wajid are also expected to enthrall the audience. In the past, popular stars such as Hrithik Roshan and Bipasha Basu have performed in the VVIP village.