On the second day of her visit to her parliamentary constituency Amethi, Smriti Irani administered the oath for maintaining national unity, integrity and security to the school children. 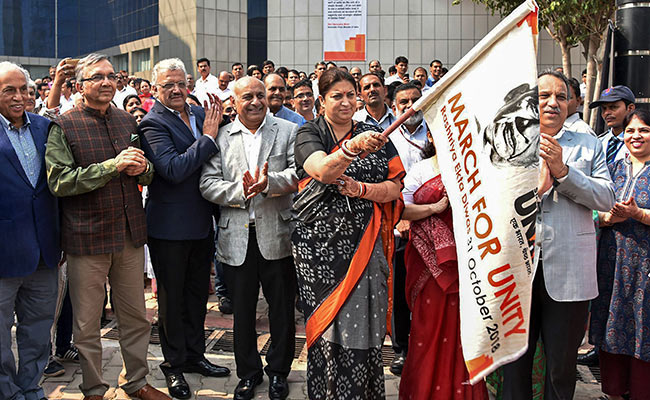 Sardar Vallabhbhai Patel's dream of a united India was realised by scrapping the provisions of Article 370, Union minister Smriti Irani said on Thursday as she congratulated the people of Jammu and Kashmir and Ladakh, which became two Union Territories after the bifurcation of the state.

The Women and Child Development minister took part in the ''Run for Unity" organised in Uttar Pradesh's Amethi to commemorate the 144th birth anniversary of Sardar Patel and administered the oath of unity to school children.

On the second day of her visit to her parliamentary constituency Amethi, Ms Irani administered the oath for maintaining national unity, integrity and security to the school children.

Interacting with reporters, she said Amethi has dedicated itself to contribute in the ''Nav Nirman'' of the country while working on the path shown by Sardar Patel.

"Sardar Patel's dream of ''Akhand Bharat'' was realised by scrapping Article 370 and I welcome and congratulate the people of Jammu and Kashmir and Ladakh," the minister said.

Jammu and Kashmir on Thursday transitioned from a state into two union territories on Thursday.

President Ram Nath Kovind revoked President's rule imposed in the state and took over control of the administration of the two new union territories, Jammu and Kashmir, and Ladakh.

Ms Irani also took part in a similar programme in Gauriganj area of the district.

Earlier she met locals at her residence and promised to resolve their problems and interacted with party leaders.