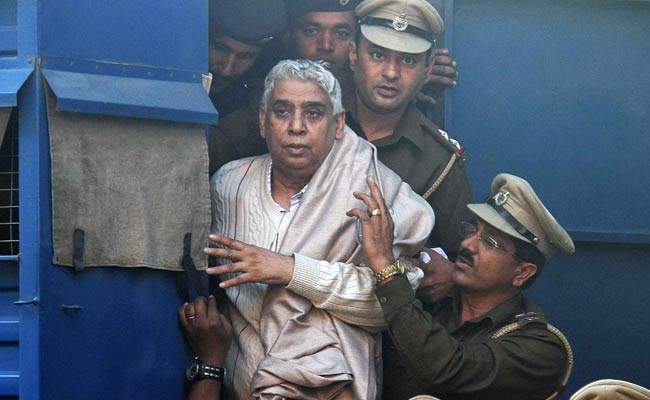 Controversial guru Rampal is escorted to the high court after his arrest, in Chandigarh on November 20. (Reuters)

Chandigarh: A huge cache of arms and ammunition, petrol bombs, acid syringes, a chilli grenade and a pregnancy test strip were found inside the highly-fortified Satlok Ashram from where controversial guru Rampal was arrested.

The shocking details came to the fore on Friday during a search conducted by the Special Investigation Team (SIT) of Haryana Police. The pregnancy test strip was recovered by police from a room adjacent to the one of Rampal in the ashram.

The police also found a woman lying unconscious and locked in a bathroom. She was admitted to general hospital. She has been identified as Bijlesh, a resident of Ashok Nagar village in Madhya Pradesh.

Most of the weapons were kept in bags and almirahs in two secret rooms. At the centre of the ashram, Rampal had an elevated structure on which he had his seat. The ammunition was stored under the structure so that no one could suspect the location.

The search also revealed a private swimming pool, state-of-the-art elevators and 24 AC rooms. The rooms, which could be compared to a luxury hotel or a farm house, had attached bathrooms fitted with top-of-the line fixtures. While one of the rooms had a massage bed, the other had a treadmill.

The team also found helmets and sticks and 20 pairs of black dresses and two tanks containing 800 litres of diesel and catapult.
The sprawling complex was found to be under constant surveillance with CCTV cameras installed at several key-points to keep a tab on the movements of devotees, who largely came from low-income strata.

A huge amount of eatables recovered during the search operation was being disposed off by the Food and Supplies Department in compliance with the orders of the High Court. The ashram ran a well-stocked kitchen that could cater to 1 lakh people for a month.

An electronic roti-making machine, with a capacity of preparing about 1,000 breads at a time, was also found.

The police spokesman said that the search operation would continue for a few days more owing to the size of the ashram.

The 'satsang' (prayer) hall in the complex, which came up in four years, is the centerpiece of the ashram with a sitting capacity for 50,000 people.

Rampal used to sit in a hydraulic chair to deliver sermons from a bullet proof enclosure as his private militia stood guard. Rampal is said to be elevated to the bulletproof cabin in the hall by means of a hydraulic lift. The hall had 3D projection facilities to screen Rampal's sermons.

A special room was set up within the Ashram for his security men comprising private commandos. The complex was found to be under constant surveillance with CCTVs installed at several key-points to keep a tab on devotees' movements.

The ashram complex saw bloody clashes on Tuesday as police tried to arrest Rampal for contempt of court after he repeatedly failed to appear in the Punjab and Haryana High Court in a 2006 murder case.

Promoted
Listen to the latest songs, only on JioSaavn.com
The police spokesman said that 7 separate cases had been registered against Rampal and his followers. The accused have been remanded to a five-day police custody.