Anna Hazare has been pressing for setting up a Lokpal at the centre and Lokayuktas in the states to probe corruption cases. 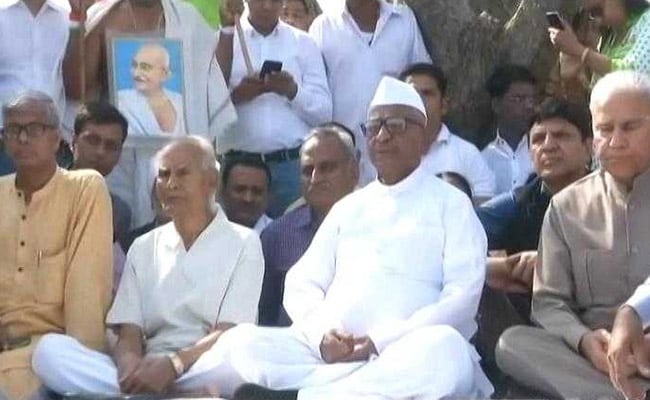 Anna Hazare Hunger Strike: He said he wanted centre to come up with "concrete" plan.

New Delhi: The indefinite hunger strike by social activist Anna Hazare will continue further after he reportedly found the draft sent by the government to address to his demands was "useless".

"We have received the draft from the government. But Annaji said it was useless as it has nothing new but old assurances. It is a routine document. At least, any minister should meet him," said Sushil Bhatt, a core committee member of Team Anna.

Anna Hazare on Friday said he would hold discussions with the government during the agitation but his "Satyagraha" of an indefinite hunger strike would continue "till the government comes out with a concrete action plan".

The second day of the agitation witnessed steady flow of people coming to iconic the Ramlila Maidan but majority of them were farmers while the middle class who displayed their anger during 2011 protest was found somewhat missing.

The protesters on Satuday were largely from Uttar Pradesh, Haryana and Punjab with some from Maharashtra, and Rajasthan.

The number will go up substantially on Sunday, said Mr Bhatt.

Narendra Patil, son of Maharashtra farmer Dharma Patil, who had committed suicide by consuming poison in the state secretariat in January this year, also participated in the agitation saying the government had not given the long-pending compensation even after the death of his father.

"Even after giving assurance in writing, Maharashtra government has not fulfilled the promises it made to us after the death of my father. It is cheating. I have decided to join the agitation to bolster farmers' voice as the current dispensation is anti-farmer," Mr Patil said.

Anna Hazare has been pressing for setting up a Lokpal at the centre and Lokayuktas in the states to probe corruption cases, bring in new electoral reforms and implementation of the M.S. Swaminathan Committee report to address the agrarian crisis in the country.

Promoted
Listen to the latest songs, only on JioSaavn.com
Some farmers have decided to leave the venue only after their demands are accepted by the government.

Shivprasad Rajput, from Uttar Pradesh's Raebareli, said: "We have neither ration at our homes nor money as we are under huge financial distress due to fall in prices. We see hope in Annaji. We will support him till our last breath. We will go back home only when our demands are accepted."
Comments
Anna HazareAnna Hazare Hunger StrikeMaharashtra