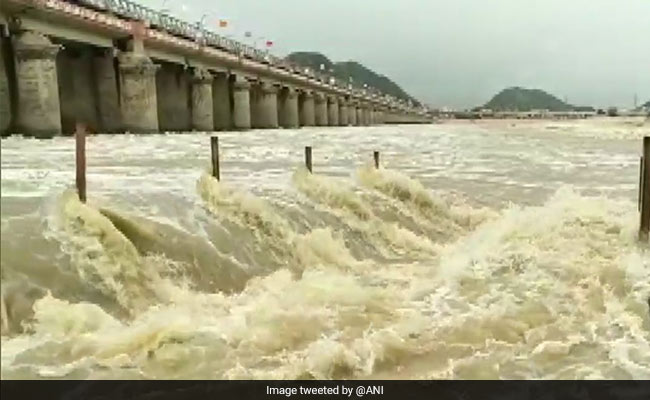 Monsoon 2020 news and updates: After touching a peak of nearly 23 lakh cusec on Tuesday morning, the flood situation in Godavari river eased a little with the flow coming down to 22 lakh cusec by afternoon, but still many villages in East and West Godavari districts of Andhra Pradesh are under floodwaters. The flood flow is expected to further go down as the water level at upstream Bhadrachalam fell by over six feet.

Chief Minister YS Jagan Mohan Reddy, who reviewed the situation, directed the Collectors of the two districts to immediately distribute Rs 2,000 each to the flood-hit families. The State Disaster Management Authority has asked people to stay alert as the third warning continued at Sir Arthur Cotton Barrage at Dowaleswaram near Rajamahendravaram.

In East Godavari district, 14,477 people from flood-hit villages are staying in 95 relief camps. In all, 147 villages in the district have been badly affected, according to the district Collector Muralidhar Reddy.

Standing paddy crop in over 2,385 hectare was destroyed in the district while cotton in 225 hectare and horticulture crop in over 5,000 hectare were also affected.

In the neighbouring West Godavari, 55 villages are still facing flood fury. Vasishta Godavari, a tributary of the Godavari is in spate cutting off key road links. About 2,000 people are living in nine relief camps, according to a Joint Collector. On river Krishna, the Srisailam reservoir received an inflow of 2.81 lakh cusec, of which 63,947 cusec was discharged downstream.

Nagarjuna Sagar received 40,259 cusec and Pulichintala 27,322 cusec but discharges from these two projects have not yet begun as they still have a large flood cushion. Flood discharge from Muniyeru rivulet also dropped today. Though the Prakasam Barrage at Vijayawada received an inflow of 1.29 lakh cusec, only 1.08 lakh cusec was being let out into the sea.