Amit Shah met the five-year-old son and other family members of inspector Arshad Ahmed Khan who was killed in a terror attack in south Kashmir's Anantnag on June 12. 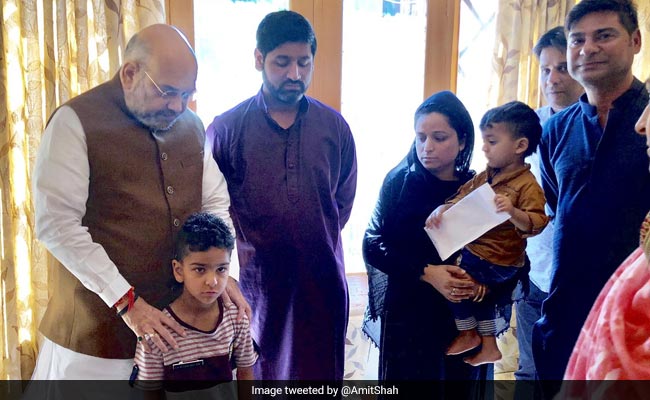 Amit Shah, who is on his first visit to Jammu and Kashmir as Home Minister, visited the family of a police officer who was killed in a terror attack in the Valley earlier this month. Mr Shah is in Jammu and Kashmir to review the security situation and developmental activities in the state.

Mr Shah met five-year-old Ubaan Khan and other family members of inspector Arshad Ahmed Khan who was killed in a terror attack in south Kashmir's Anantnag on June 12, at their home in Srinagar. A photo of a senior police officer breaking down while carrying the child during his father's wreath-laying ceremony was widely shared on social media, capturing the hearts of thousands online.

"His sacrifice for the security of our nation has saved many lives. Entire nation is proud of Arshad Khan's valour & courage," Amit Shah wrote on Twitter, along with his pictures with the family.

Visited the home of inspector Arshad Khan, SHO Anantnag in Srinagar, who was martyred in a terror attack & offered my condolences to the bereaved family.

His sacrifice for the security of our nation has saved many lives. Entire nation is proud of Arshad Khan's valour & courage. pic.twitter.com/eByqlVubo6

Arshad Khan, 37-year-old Station House Officer, was injured when a terrorist fired at a patrol team of the Central Reserve Police Force (CRPF). Five CRPF soldiers too were killed in the attack in which grenades were also thrown.

The moment Arshad Khan stepped out of his official bulletproof vehicle, along with his service rifle, a barrage of bullets were fired by the terrorist. One shot off from the read of of his service rifle and hit his liver and intestine, officials had said.

Even in that condition, the officer kept firing bullets at the terrorist before he collapsed, they had said.

Arshad Khan was rushed to a local hospital and then shifted to the premier All India Institute of Medical Sciences (AIIMS) in Delhi where he died to injuries.

He is survived by his wife, two sons, parents and a younger brother. He belonged to Srinagar city and was recruited in the state police in 2002.

On Wednesday, Mr Shah held a review meeting of the security arrangements for the Amarnath pilgrimage season and asked all security agencies to take all preventive steps to ensure a violence-free Amarnath Yatra.

India's Strong Response To US About Human Rights Concerns: Report