Amit Shah's visit comes amid heightened tension in J&K following the targeted killing of civilians across the region; 11 - including Muslims - have been killed this month

Union Home Minister Amit Shah landed in Jammu and Kashmir Saturday morning for a three-day visit - his first since he led the government's charge to scrap Article 370 in August two years ago.

He was received at Srinagar airport by J&K Lieutenant Governor Manoj Sinha.

After landing the Home Minister visited the family of J&K police officer Inspector Parvaiz Ahmad, who was killed by terrorists this month. Mr Shah has offered Mr Ahmad's wife a government job.

Amit Shah's visit comes amid heightened tension in J&K following the targeted killing of civilians; 11 - including Hindus, Muslims, and Sikhs - have been killed this month, triggering panic among migrant workers and the Kashmiri Pandit community, some of whom have already fled.

He chaired a meeting of the Unified Command to review the on-ground situation, at which he reportedly asked tough questions of the security and intel agencies operating in J&K.

Sources told NDTV the meeting included following up on tasks given to agencies during a meeting in Delhi last month. Sources also said Mr Shah's focus was on addressing radicalisation and infiltration. 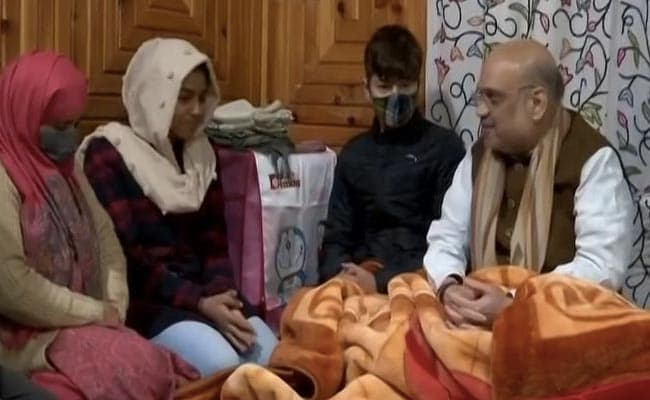 On Sunday, he will travel to Jammu to address a public rally, and on Monday, he is likely to meet village heads to address their concerns before flying back to Delhi.

The civilian killings have prompted extra precautions for Mr Shah's visit, with fortifications in a 20 km radius around Raj Bhavan (where he will stay) on Srinagar's Gupkar Road.

Drones were spotted Friday to keep track of suspicious movement and the CRPF monitored activity on Dal Lake and parts of the Jhelum River that flows through the interior of the city.

"Snipers and sharpshooters have been deployed at strategic places. Vehicles are being checked and pedestrians frisked. Not to harass the public but for their safety too," he added.

This week J&K police said four Lashkar terrorists linked to the deaths of civilians - three migrant workers - had been killed after encounters in Shopian and Kulgam districts.

Last week two other terrorists - involved in the killing of a civilian and a cop - were killed in back-to-back encounters in Srinagar and Pulwama. According to police, one of those killed was involved in the death of Mohammad Shafi in Srinagar on October 2.

17 terrorists have been killed during 11 encounters in the last two weeks, according to Vijay Kumar, Inspector-General of Police (IGP), Kashmir.

The attacks on civilians has come at a time when the Army is engaged in one of the longest and toughest anti-terror ops in recent times.. Yesterday there was heavy firing in the Poonch sector as the Army hunted down terrorists hiding in the forests there for the past 12 days.

Army and police sources have said the fierceness of the fighting has led to speculation the terrorists may have been trained by Pak commandos. Nine soldiers have been killed in action so far.