This is Shah's first visit to Kashmir since the scrappingof Article 370 and bifurcation of the erstwhile state of Jammu and Kashmir on August 5, 2019. 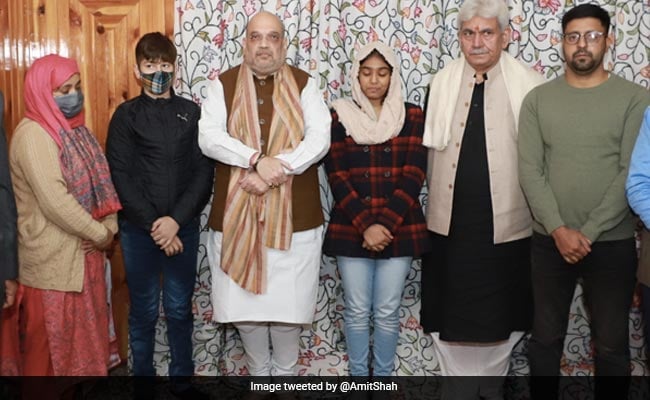 Amit Shah gave documents of appointment to a government job to the police officer's widow.

Home Minister Amit Shah on Saturday visited the family of Jammu and Kashmir Police officer Parvaiz Ahmad who was killed by terrorists in June this year in Nowgam area of the city.

Mr Shah, who arrived in Srinagar on a three-day visit to Jammu and Kashmir, drove straight to Nowgam from the airport.

"The home minister visited the house of Jammu and Kashmir Police, Inspector Parvaiz, who was killed by terrorists," a home ministry official said.

Officials said Mr Shah offered his condolences to the family of the police officer.

He also gave documents of appointment to a government job to the police officer's widow, Fatima Akhtar, on compassionate grounds.

In a tweet later, Mr Shah said, "Today visited the family of martyr Parvaiz Ahmad Dar and paid tributes to him. I and the nation are proud of his bravery. Jammu and Kashmir Police is making all efforts to realise the vision of PM Modi for a new JK."

Mr Ahmad was shot dead by terrorists near his house in Nowgam when he was returning home after offering evening prayers on June 22.

This is Shah's first visit to Kashmir since the scrapping of Article 370 and bifurcation of the erstwhile state of Jammu and Kashmir on August 5, 2019.