The BJP's stand has always been clear on the issue and I want to declare today that the Ram Temple in Ayodhya should be built at the earliest. Will Rahul Gandhi too define his stand on the issue?" Amit Shah said to loud cheers of Jai Shri Ram. 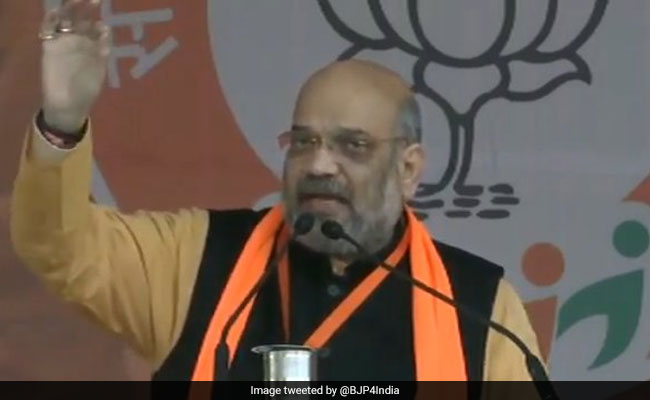 Amit Shah accused the Congress of putting up obstacles to the temple's construction.

BJP president Amit Shah on Saturday said a Ram temple should be built in Ayodhya at the earliest and dared the Congress to spell out its own stand on the issue.

The Kumbh fair is on and it is only natural that the demand for a Ram temple is being raised, he said at a meeting of the party's booth-level workers, virtually launching the BJP's campaign in Uttarakhand for the Lok Sabha polls.

The BJP's stand has always been clear on the issue and I want to declare today that the Ram Temple in Ayodhya should be built at the earliest. Will Rahul Gandhi too define his stand on the issue?" Mr Shah said to loud cheers of Jai Shri Ram.

At the Parade Ground meeting, the Bharatiya Janata Party chief also hit out at opposition attempts to forge a 'mahagathbandhan', or a grand alliance, for the parliamentary elections just months away.

He accused the Congress of putting up obstacles to the temple's construction through its lawyers in the Supreme Court.

Mr Shah was referring to a plea in 2017 by Kapil Sibal, who was representing the Sunni Waqf Board, to postpone hearings in the Ram Janmabhoomi-Babri Masjid land dispute till the Lok Sabha elections are over.

"The Congress should come forward and explain why it had sought deferment of the hearing in the country's oldest title suit," Mr Shah said.

The Supreme Court had turned down the plea.

Mr Shah contrasted this with the recent petition by the BJP government in the Supreme Court, seeking to return the land around the disputed Ram Janmabhoomi-Babri Masjid site to its original owners.

His remarks follow increasing demands on the BJP-led government from Hindutva organisations, and seers who held meetings at the Kumbh Mela recently, to ensure an early construction of the temple.

Mr Shah called the 'mahagathbandhan' a desperate coming together of political forces opposed to each other as they cannot think of taking on PM Modi alone.

The bua-bhatija (aunt and nephew) have come together in UP. Do you think they will stay together,'' he said, referring to the alliance between the Bahujan Samaj Party's Mayawati and the Samajwadi Party's Akhilesh Yadav in Uttar Pradesh.

Who is going to listen to a Chandrababu Naidu at a public meeting in Haldwani or a Deve Gowda in Dehradun? They are leaders of regional parties with a limited appeal," the BJP leader said.

Their only aim is 'Modi Hatao' (Remove Modi) whereas PM Modi wants to remove poverty, corruption and disease, he said.

He said casteism and dynastic politics had no future in the country and urged people to bring back PM Modi with a clear mandate if they wanted a government capable of delivering on its promises.

He asked them to ensure that the party wins all the five Lok Sabha seats in Uttarakhand, as it did in 2014.

"Uttarakhand is Prime Minister Narendra Modi's priority," he said and referred to the makeover of Kedarnath after the 2013 floods.

He praised the interim Budget presented on Friday, saying it took care of all sections of society, particularly farmers, women, the poor and the marginalised.

Highlighting the Budget provisions for the farmers, he mocked the Congress.

"Do you understand the difference between Rabi and Kharif? Do you know the problems of the farmers? Have you really connected with them ever?" he said, without naming anyone.