In 2016, the relationship between the Bachchans and the Singhs suffered a major blow when Amar Singh made his complaints against Jaya Bachchan public. 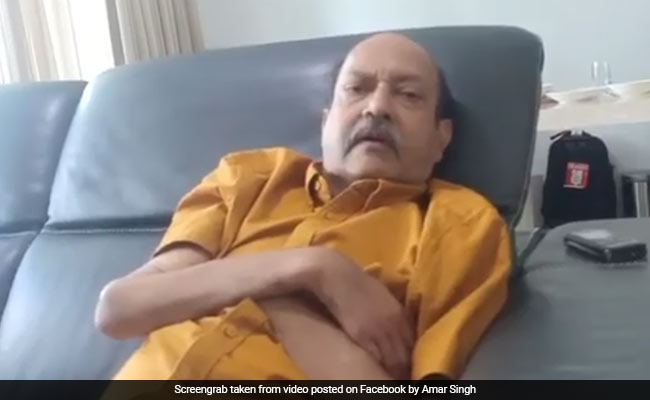 Amar Singh, in the video said, he feels he had "overreacted" against Amitabh Bachchan (File)

Rajya Sabha MP Amar Singh has released a video expressing "regret" over his behaviour towards Amitabh Bachchan and his family. The former Samajwadi party leader recorded and posted the video on his official Facebook account after receiving Mr Bachchan's message on the death anniversary of his father.

Amar Singh, who was once an inseparable part of the Bachchan family was surprised by the message, given that he had used the harshest words against the actor's wife - Jaya Bachchan.

"If not anything, he was elder to me. I should have been sober to him. I realise, I must express regret for the harsh words I used (against them). In my mind, more than hatred, I had disappointment towards his behaviour. But it seems, he never had any disappointment, nor bitterness in him (against me)," says a visibly feeble Amar Singh, half-laying on a couch.

"He has some feelings. That's why he has conveyed his tributes on my father's death anniversary. Acknowledging that I would urge the God to give justice to all according to their karma. We should leave it to the almighty," he added.

On Twitter, he said: "Today is my father's death anniversary and I got a message for the same from @SrBachchan ji. At this stage of life when I am fighting a battle of life and death I regret for my over reaction against Amit ji and family. God bless them all."

Today is my father's death anniversary & I got a message for the same from @SrBachchan ji. At this stage of life when I am fighting a battle of life & death I regret for my over reaction against Amit ji & family. God bless them all.

Amar Singh, the Bachchan family and Anil Ambani were at on point seen almost like an extended family. But way back in 2016, the relationship, at least between the Bachchans and Singhs suffered a major blow when Mr Singh went public with his complaints against Jaya Bachchan.

He was quoted as saying, "I have made public vows in Bareilly two days ago. As far as Aishwarya (Rai Bachchan) is concerned, she has always given me utmost respect and Abhishek (Bachchan) has not uttered a single word against me. I don't have any issue with Amitabh Bachchan. He actually warned me not to accept Jaya Bachchan in my political field considering her inconsistent nature and habits. But I did not adhere to his noble advice. He also warned me that she is very inconsistent in her ways so don't expect any consistency as far as she is concerned. And subsequently, he sought an apology on her behalf and the matter was done and over. Thereafter, at Anil Ambani's residence, at a dinner, a major squabble took place and that too on behalf of Jaya Bachchan and he became a party to my dispute with Mrs. Bachchan."

The disagreement, which happened in private, was made public by Amar Singh.

Posting the latest video from a hospital bed in Singapore, where the Bachchan family stayed with him the last time when he was undergoing a kidney treatment almost a decade ago, said he is fighting a battle of "life and death".

"For the past 10 years, I was not only keeping distance from the Bachchan family but also used to believe that they hate me. However he (Amitabh Bachchan) used to always send him messages whether it was his birthday or father's death anniversary. So I feel that I overreacted against him," he added.