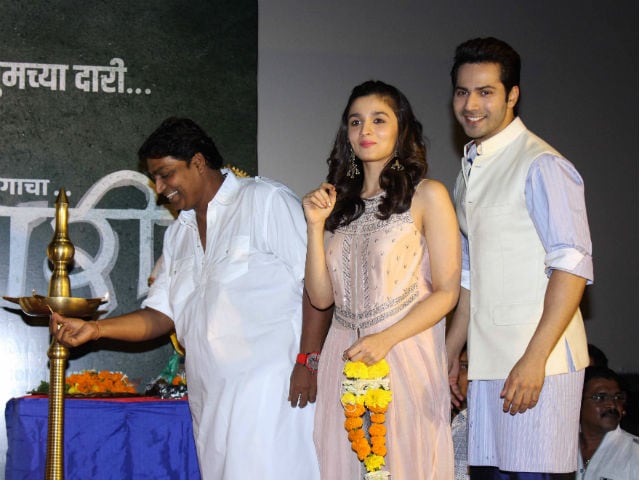 Alia and Varun photographed in Mumbai

New Delhi: Actors Alia Bhatt and Varun Dhawan launched a Ganapati song from choreographer-director Ganesh Acharya's forthcoming film Bhikari. Today, the 30-year-old actor shared the news with his fans and followers on Twitter: "Was an honour to launch the music for Masterji's film 'Bhikari'," wrote Varun Dhawan. Alia Bhatt also tweeted, saying that it was a 'pleasure' to launch the song. "Such a pleasure to launch Masterji's song today! A film that's made from his heart," the 24-year-old actress tweeted. Ganesh Acharya's Bhikari reportedly revolves around the emotional bond between a mother and her son. The film stars Swapnil Joshi, Rucha Inamdar, Guru Thakur, Sayaji Shinde, Milind Shinde, Kirti Aadarkar and Pradip Kabra in lead roles.

Was an honour to launch the music for masterjis film #bhikaripic.twitter.com/Pj9qb2HjAt

Such a pleasure to launch Master Ji's song today! A film that's made from his heart https://t.co/buDiO2NfNo@Acharya1Ganesh#Bikhari

Speaking to news agency IANS, Varun Dhawan praised Ganesh Acharya and said that he has played an important role in his life.

"Masterji (Ganesh) has been biggest part of my life. I know him since my childhood. I have grown up in front of him, so I am a bit emotional launching his film's song. Many choreographers choreograph songs from their mind, but he is the only person who choreographs songs from his heart," IANS quoted the Badlapur actor as saying.

"In this song as well, I could see each artiste dancing in the song with full passion and not for promotion of the film as it was all coming from within them. He has massive faith on Ganapati and that is the reason I know his film and his team will be successful," he added.

The Udta Punjab actress told IANS that Ganesh Acharya is a 'master of his craft.'

Ganesh Acharya told IANS that he is 'happy' that Varun and Alia agreed to launch the Ganpati song from his film.

"I am really happy that my Ganapati song has been launched by Varun and Alia. We have worked very hard for the film. We are not looking this film as Hindi or Marathi as we have tried to raise the bar and scale of the film," IANS quoted Ganesh Acharya as saying.

Alia Bhatt and Varun Dhawan have co-starred in Student Of The Year, Humpty Sharma Ki Dulhania and Badrinath Ki Dulhania. The duo will reportedly collaborate once again with Abhishek Varman's next film, titled Shiddat.