"A Owaisi's Party Is BJP's B Team": Tejashwi Yadav Ahead Of Bypoll 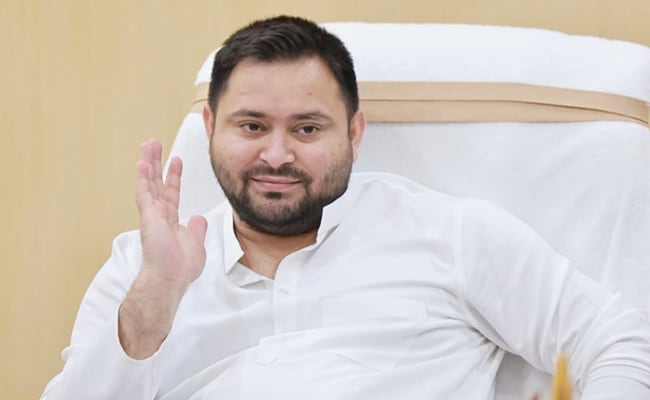 "Be cautious of the BJP, they can cause disturbances," Tejashwi Yadav alleged

Bihar Deputy CM asked people in Yadopur to give them a chance for only three years and said, "You gave chance to the BJP for 17 years; give him three years, if you don't see any development in Gopalganj don't vote for him in the next elections."

Yadav further asked the people to remain "cautious" calling it a festival season.

He said, "Be cautious of the BJP, they can cause disturbances and might do Hindu-Muslim if they find nothing. They are ready to go to any extent for the sake of their own benefit."

Earlier on October 18, a Delhi court advised Yadav to be responsible and choose appropriate words while speaking in public.

Former Deputy Chief Minister of Bihar and Bharatiya Janata Party (BJP) leader Sushil Kumar Modi on October 18 said that the state's Tejashwi Yadav's appearing in the court in a corruption-related matter is a "big insult".

Modi further said, "Yadav has been reprimanded by the court and had to face humiliation in court."

He further added that the Central Bureau of Investigation was a parrot in the UPA regime but since the Narendra Modi government was formed, the CBI is free and there has been no pressure from anyone.

Meanwhile, the Court also refused to cancel the bail granted to him in the Indian Railway Catering and Tourism Corporation (IRCTC) alleged scam case.

The Special Judge Geetanjali Goel, while passing oral order on the Central Bureau of Investigation (CBI) plea seeking cancellation of bail against Tejashwi Yadav, said directly to Yadav, "You are on very responsible post, it is not right to use such words. Use appropriate words in public because your words impact a huge number of the public."

"You have to understand the implications of your words. This should not happen again. You must choose words carefully and not issue and use such words which have the potential to influence witnesses," said the court.

Tejashwi Yadav is one of the accused in the IRCTC alleged scam case. He is presently Deputy CM of Bihar State. According to the CBI, Tejashwi Yadav had threatened the CBI officials while addressing a press conference, thereby influencing the case.

CBI earlier submitted that the statements made by him (Tejashwi Yadav) are an open threat to the CBI, the officers and their families by the accused. The accused has openly warned the CBI officers against carrying out the investigations, also resorting to innuendoes and threats in the process, CBI said.

CBI had registered a criminal case against then railway minister Lalu Prasad Yadav, Tejashwi Yadav and others in 2017.

Earlier the court had granted Tejashwi Yadav and others bail after taking cognizance on the chargesheet filed by CBI in the IRCTC scam case. The court noted that the case pertains to alleged irregularities in granting the operational contract of two IRCTC hotels to a private firm.