Around 5,000 women from 51 districts of Madhya Pradesh met Shivraj Singh Chouhan in two phases at the Chief Minister's home. 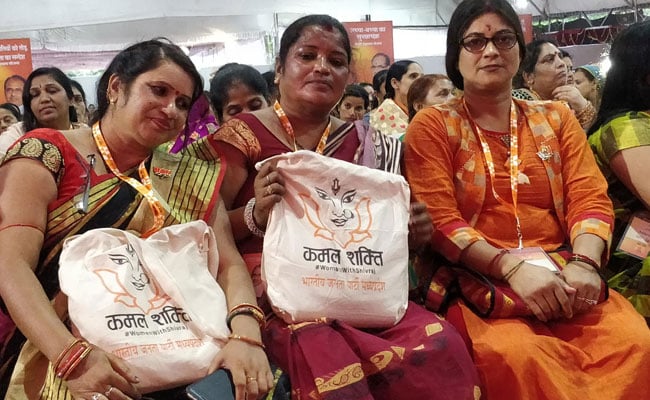 The BJP has said they have always worked for gender justice and equality.

The BJP is leaving no stone unturned to make sure that Shivraj Singh Chouhan returns to power in Madhya Pradesh when the state goes to polls later this year. The women voters in the state have always been the strength of the BJP. This time as well, the state's ruling party is going all out to persuade the women voters.

After sending 65 lakh letters to women across the state on Raksha Bandhan by the chief minister, now a group of women volunteers named 'Kamal Shakti' has been formed.

Around 5,000 women from 51 districts of the state met Shivraj Singh Chouhan in two phases at the Chief Minister's home.

Each member from 'Kamal Shakti' has to connect with 50 women in each and every constituency. They are expected to create WhatsApp groups and connect with 5 lakh social media volunteers across the state and make the voters aware of pro-women schemes of the state government like Ladli Lakshmi Yojana, Teerth Darshan, Beti Bachao and Balika Shiksha Protshan Yojna. They will also have to confirm their participation via an SMS, a WhatsApp message or a missed call.

Mr Chouhan, while addressing 'Kamal Shakti' volunteers, reminded women of his place as their 'brother' before the elections and asked for their vote to make him the leader of the state for a fourth term.

Shivraj Singh Chouhan reminded the women of his place as their 'brother'.

The BJP has said they have always worked for gender justice and equality. Revenue minister and senior BJP leader Umashankar Gupta said, "We have announced a 33 per cent reservation in jobs for women in all government departments. We believe in ending discrimination and ensure development for women."

The opposition Congress, however, was unimpressed by the gesture and attacked the government over the crimes against women. Congress spokesperson Bhupendra Gupta said, "The BJP treats women as second grade citizens. They have failed to give safe environment to women in 15 years of rule and put MP on the top in terms of crimes against women."

While both the Congress and BJP talk about the uplift of women, statistics show it rarely reflects while fielding women candidates. In 2013, in 230 assembly constituencies, the BJP fielded 30 women candidates of which 24 got elected to the state legislature. Out of the 22 women fielded by the Congress, six got elected as legislators.