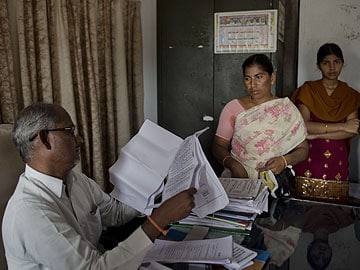 Latha Reddy Musukula, second from left, whose husband committed suicide because of farming debts less than a year ago, at a government building in Andhra Pradesh, India, Jan. 20, 2014. (Andrea Bruce/The New York Times)

Bollinkunta: Latha Reddy Musukula was making tea on a recent morning when she spotted the money lenders walking down the dirt path toward her house. They came in a phalanx of 15 men, by her estimate. She knew their faces, because they had walked down the path before.

After each visit, her husband, a farmer named Veera Reddy, sank deeper into silence, frozen by some terror he would not explain. Three times he cut his wrists. He tied a noose to a tree, relenting when the family surrounded him, weeping. In the end he waited until Musukula stepped out, and then he hanged himself from a pipe supporting their roof, leaving a careful list of each debt he owed to each money lender. She learned the full sum then: 400,000 rupees ($6,430).

A current of dread runs through this farmland, where women in jewel-coloured saris bend their backs over watery terraces of rice. In Andhra Pradesh, the southern state where Musukula lives, the suicide rate among farmers is nearly three times the national average; since 1995, the number of suicides by India's farmers has passed 290,000, according to the national crime records bureau, though the statistics do not specify the reason for the act.

India's small farmers, once the country's economic backbone and most reliable vote bank, are increasingly being left behind. With global competition and rising costs cutting into their lean profits, their ranks are dwindling, as is their contribution to the gross domestic product. If rural voters once made their plight into front-page news around election time, this year the large parties are jockeying for the votes of the urban middle class. Farmers' voices are all but silent.

Even death brings no release: When farmers like Reddy take their own lives, their debts pass from husband to widow, from father to children.

Musukula's story is emblematic of the trap in which many find themselves: a farmer's daughter, then wife, and now trying to farm the land herself, she is the end of the line, a hair's breadth from ruin. Around her she sees a country transformed by economic growth, full of opportunities to break out of poverty, if only her son or daughter could grasp one.

But the dragnet that closed around her husband is tightening around her. Like nearly every one of her neighbours, she is locked into an archaic bond with the village money lender - an intimate bond, and sometimes a menacing one. No sooner did they cut her husband's body down than one of them was in her house, threatening to block the cremation unless she paid.

Her appeals to officials for help have been met with indifference. Lately, her fear has been getting the better of her.

"Sure, they will pay, otherwise it would be as if someone has broken into our house and stolen our money," said Sudhakar Ravula, a slight man who lives in a village about 2 miles away. He introduces himself as a fisherman, but, under questioning, fishes out a pair of gold-rimmed reading glasses and unfolds a promissory note signed by Veera Reddy.

Four years ago, he said, he used borrowed money to lend Reddy $800, at an annual interest rate of 24 percent. Reminded of Reddy's suicide, Ravula looked impatient.

"I always feel sad for the man," he said, "but committing suicide is not the right way to go about it."

Stories of farmers committing suicide may prompt shudders in gatherings of sociologists, but the local officials have heard it all before. When market reforms were introduced in 1991, the state scaled down subsidies and import barriers fell, thrusting small farmers into an unforgiving global market. Farmers took on new risks, switching to commercial crops and expensive, genetically modified seeds, paying more to educate their children in the hopes they would land government jobs.

They found themselves locked in a white-knuckle gamble, juggling ever-larger loans at exorbitant interest rates, always hoping a bumper harvest would allow them to clear their debts, so they could take out new ones. This pattern has left a trail of human wreckage.

On a recent afternoon, Musukula was one of 18 women waiting outside a pale-green government building. Nearly every woman carried a police report, identifying debt as the cause of a farmer's suicide - a fact that should entitle them to a one-time payment of 150,000 rupees, to be split between the money lenders and the bereaved family, pledged by the state government around election time in 2004.

To receive it, they needed a designation from the district revenue officer. They had come to see one of the officer's subordinates, a local revenue officer who might act as a gatekeeper.

They crowded into the back of his office and took a good look at him: P. Bhiksham, a middle-aged man in rimless glasses, a green towel tucked behind his back to soak up sweat. Bhiksham listened to two women recite the details of their husbands' deaths, and then began to speak.

The real problem, he said, was that their husbands drank too much.

He went on to say that he had never in his career encountered a genuine case of farmer suicide.

"We all have freedom to choose our own livelihoods," he said, primly, "and the land here is fertile."

The women listened silently and filed out. They were disappointed by what Bhiksham had said, but not surprised. Many local officials blame farmers for mismanaging their finances.

"The family will always tell you it's a farmer suicide," said G. Satyanarayana, the chief inspector at the precinct that had registered Veera Reddy's suicide in 2012.

After glancing through the case file, he said Reddy had been undone by "his bad habits," by which he meant drinking. The real problem, he said, was that local farmers were overspending on their children's education.

"Some of the farmers are getting unreasonably aspirational," he said. "These are small farmers from villages, but they don't send their kids to government schools, but to private schools. They are going for false prestige, they don't really take note of their own financial status. The mother, instead of going out to the fields at 5 a.m., she is waiting for the school bus at 9 a.m."

As for money lenders harassing widows after a suicide, he said the police had never received any reports of this happening, so were powerless to take any action. Probably, he said, villagers do not go to police about money lenders because they are afraid they will need a loan in the future.

"Nobody approaches the police," he said. "You always wish they would come and complain."

Latha Musukula is beginning to be undone by fear. On the morning when the money lenders had come to her doorstep, she tried to do what her husband had always done - chitchat, put them off for a month or two. But then one of the money lenders described the house he planned to build on Musukula's land, and addressed her as "whore."

Musukula was so thrown off balance that she repeated the words the money lender asked her to say, promising to repay the whole amount by April. She had no idea how she was going to do it.

Her brother-in-law promised Ravula that the state compensation package was on its way, but that was not true. Ravula advised her to sell her 4 acres of farmland, a move that would leave the family without a source of income. She would be forced to return penniless to her brother's household. It would be the end of all their efforts.

Because they cannot repay their loans, Musukula said, only one family in the village is willing to talk to them.

Fingers of fear climb up her neck as she walks to her cornfields in the morning. The corn is shrivelling for lack of water, she can see that, and one of the farm's two generators was just disconnected for non-payment.

When she went to the doctor the other day, she said, he "told me that my nerves may break soon."

Something similar happened in the months before her husband killed himself, when he suddenly seemed frightened to leave the house. Always a drinker and an expansive host, he seemed to retreat into himself.

"He told me, 'I am going to die, I don't know how you are going to take care of the loans, because I am going to die,'" she recalled. A week before he killed himself, he said, "How will you manage things if I die? Will you cry a lot? You'll be harassed by everyone."

We'll scrape by, she told him then. A couple good harvests and we can pay them all off. These days it is she who disappears into silences, and her son and daughter who watch from a distance, uncertain of the exact amount that the family owes. Musukula tries to shield them from this information, telling them to focus on their studies, but Srilekha is 18, and she knows.

Promoted
Listen to the latest songs, only on JioSaavn.com
"Mommy hopes to delay the loans and repay what we make from the farm, but we suffer losses almost every year," she said. "My brother and I wish that the money lenders would wait until we finish school and get a job, but it is not possible."

She added: "The money lenders will not stop. What has to happen, will happen."
© 2014, The New York Times News Service