After Haj Office Wall, Lucknow Police Station Gets A Coat Of Saffron

Ever since Yogi Adityanath took over as the chief minister of UP, the colour seems to have become a defining feature of the state. 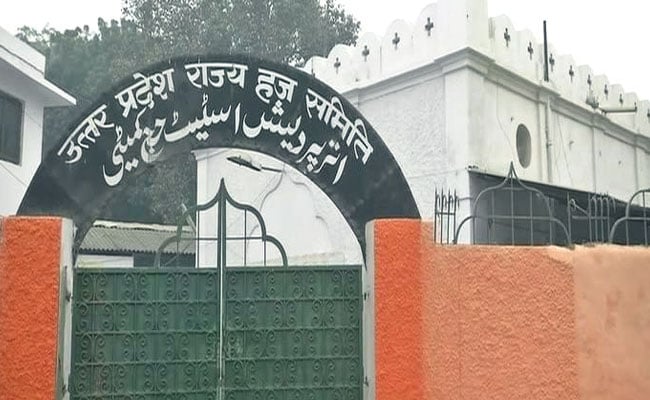 After the Haj Office boundary wall (in pic), the Qaiser Bagh police station has got a safrron hue

Lucknow: The colour saffron appears to be gradually spreading across Uttar Pradesh, with parts of a nearly 80-year-old police station in the state capital being given a splash of the colour, days after the Haj office was painted orange.

Ever since Yogi Adityanath took over as the chief minister of UP, the colour seems to have become a defining feature of the state.

It has virtually permeated everything -- from booklets and school bags to towels or chairs and even buses. And the Qaiser Bagh police station here seems to be the latest on the list.

But this time round some pillars and certain parts of the building have acquired a bright saffron hue against a light cream background.

"The renovation had started almost two-and-a-half months back as part of an annual programme," Inspector in-charge D K Upadhyaya told PTI. The renovation work is incomplete as the labourers have recently stopped coming because of the intense cold, he said.

The facade of the state secretariat was given a saffron hue months after Mr Adityanath took over the reins of the state.

Mr Adityanath loves to see a saffron towel on his seat in his office. Recently, the chief minister flagged off a fleet of 50 saffron-coloured buses.

Official booklets that were distributed to mark 100 days and then six months of the Adityanath government had saffron covers and the information diary of the state government, which contains the contacts and designations of various officials, is also saffron.

Promoted
Listen to the latest songs, only on JioSaavn.com
Interestingly, after the bright saffron shade on the Haj office boundary wall attracted criticism from the Opposition and flak from Muslim bodies, it was given a cream coat by the Estates department recently. The boundary wall originally was green and white.

The Haj office colour prompted opposition Samajwadi Party to accuse the government of "blatant saffronisation" after a series of steps were perceived by it as "anti-minority".