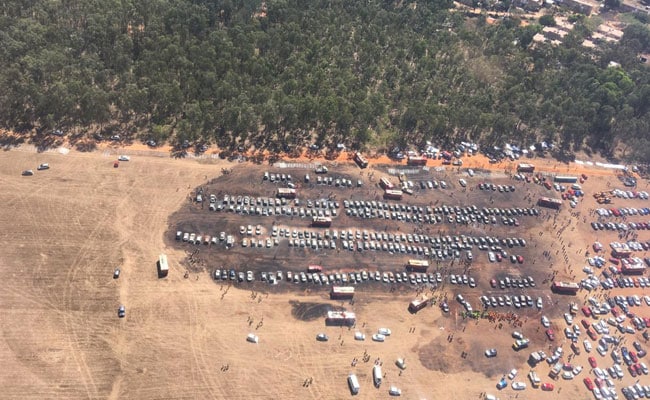 A blanket of thick black smoke engulfed the area causing panic among visitors.

A major fire swept through the parking area of the Aero India event at the Yelahanka Air Force station in Bengaluru, gutting about 300 cars on Saturday, the penultimate day of Asia's premier air show. After the blaze put out, an incredible aerial image showed the incredible extent of damage.

No casualties were reported in the fire, authorities said, adding the parking area was "far away" from the air force station.

The 12th edition of the five-day air show went on unaffected by the fire incident, which came four days after two jets of Indian Air Force's aerobatic team Surya Kiran crashed, killing a pilot a day before the opening of the event.

The scheduled morning aerobatic display was over before the fire broke out at around noon while the afternoon programme was unhindered, Defence Public Relations Officer H L Guruprasad said.

The events slated for Sunday, the final day, would go ahead as planned, he said.

A blanket of thick black smoke engulfed the area causing panic among locals and visitors to the Aero India event.

Eyewitnesses said they heard repeated blasts as the fire spread. Car owners rushed to the spot after they received information about the incident.

A Court of Inquiry has been ordered to investigate the cause of the fire, a Press Information Bureau (Defence Wing) release said. The "unfortunate incident" happened at around 11:55 AM, it said.