Maharashtra Governor Listened Like "I Was His Daughter": Kangana Ranaut

The meeting comes days after Ms Ranaut's Mumbai office was partially demolished by civic officials in a move she alleged was revenge for comments criticising the state's handling of the Sushant Rajput case and comparing Mumbai to Pakistan-occupied Kashmir (PoK).

"I told him about the unjust treatment I've received. I hope justice will be given to me so that the faith of all citizens, including young girls, in the system is restored. I am fortunate that the Governor listened to me like his own daughter," Ms Ranaut told news agency ANI after the meeting.

An incensed Shiv Sena had lashed out at Ms Ranaut, 33, after her remarks, with senior leader Sanjay Raut using a slur and another threatening to have the actor slapped.

The Governor, on Friday, met with an advisor of Chief Minister Uddhav Thackeray as the demolition of Ms Ranaut's office was being carried out; Mr Koshyari expressed his displeasure over the Mumbai civic body's move, a source was quoted as saying by news agency PTI.

Last week the Bombay High Court halted the demolition of Ms Ranaut's office in Mumbai's posh Pali Hills neighbourhood after she filed a petition. In what was seen as a big win for her, the court adjourned the case till September 22. 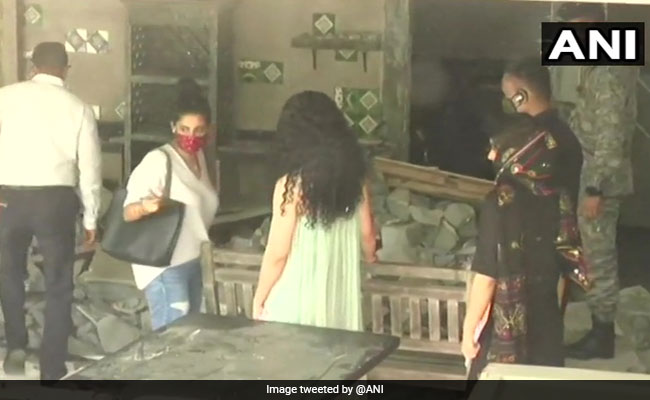 The civic body has claimed the actor has 14 "violations" on the site, which includes a toilet apparently built in space marked for a kitchen and an office set up in an area meant for a toilet. Ms Ranaut, who is a vocal supporter of Prime Minister Narendra Modi, has said she has the necessary permissions.

The High Court observed the demolition was taking place while the actor was out of state - in Himachal Pradesh - and given only 24 hours to respond.

Ms Ranaut, who has also taken on Uddhav Thackeray over this issue, also faces two police complaints accusing her of using foul language against and trying "to diminish the character and challenge the dignity" of the Chief Minister.

In a video released on social media last week, the actor referred to Mr Thackeray as "tu", saying: "Uddhav Thackeray, tujhe kya lagta hai? (what do you think?) That you colluded along with the film mafia, demolished my home and took revenge on me? My home was demolished today, your arrogance will crumble tomorrow".

On Sunday , Mr Thackeray said he was ready to face any storm that came his way. "Whatever storms have reached the state, be it natural or political, the government has been fighting them," he said.