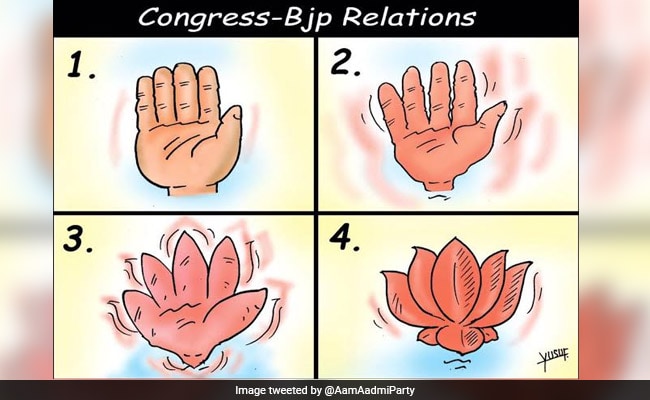 The AAP took a cheeky swipe at rivals BJP and Congress on Tuesday, even as one party teeters on the brink of losing power in Rajasthan and the other circles expectantly, waiting to pounce as it did in Madhya Pradesh three months ago.

In its tweet the AAP, which has beaten both parties - by comfortable margins - in two consecutive Delhi elections, simply posted an image of an open hand (the symbol of the Congress) shaking and transforming into a lotus (the symbol of the BJP).

The tweet was seen by many as a not-so-subtle reference to continuing allegations that the BJP has brought down governments in Karnataka and Madhya Pradesh by bribing and poaching Congress MLAs.

Rajasthan Chief Minister Ashok Gehlot made that allegation on Saturday, days before his deputy, Sachin Pilot, launched an open revolt and dumped the Congress in a world of trouble.

"We keep hearing talk of money being offered to MLAs to switch sides. Some have been promised up to Rs 15 crores... this is happening on a constant basis," Mr Gehlot said.

Mr Singh said the BJP was trying to "lure the Congress's legislators by offering Rs 25-35 crore".

The AAP too has made such claims; in May last year Delhi Deputy Chief Minister Manish Sisodia said: "7 MLAs have been contacted by BJP and are being offered 10 crores each to leave AAP".

In 2014 Chief Minister Arvind Kejriwal released a sting video that claimed to show a senior BJP leader offering Rs 4 crore to AAP leader Dinesh Mohania in return for his support.

The BJP has steadfastly denied these allegations.

Responding to Digvijaya Singh's claims about MLA poaching in Madhya Pradesh, Shivraj Singh Chouhan, who returned as chief minister after Kamal Nath resigned, said internal strife was to blame for the Congress's problems.

Meanwhile, the Congress is on the brink of losing Rajasthan just three months after it lost Madhya Pradesh in almost identical fashion.

Rebel leader Sachin Pilot has been sacked as Deputy Chief Minister and removed as Rajasthan Congress President and the BJP, which needs around 30 MLAs to cross the majority mark, is watching, waiting and circling.