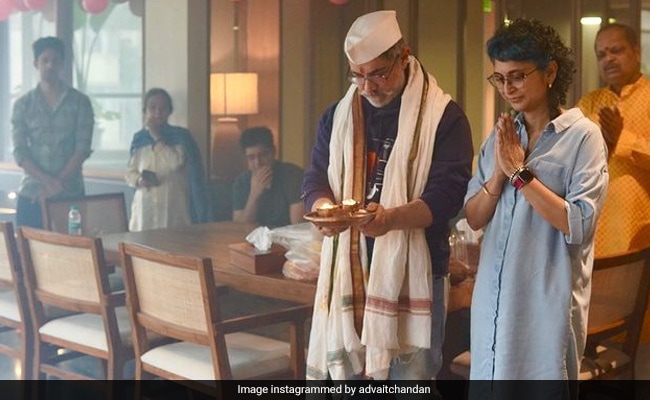 Aamir Khan performing the puja at his office.

Actor Aamir Khan performed puja at the office of Aamir Khan Production recently. The photos from the ceremony have been shared on Instagram by Laal Singh Chaddha director Advait Chandan. In the photos, Aamir is seen holding a kalash (a metal pot) topped with a coconut, used on such occasions, and offering prayers. The actor is seen wearing a sweatshirt and a pair of jeans. A cloth is also seen around his shoulders. The purpose of the puja has not been mentioned by Advait Chandan, who has shared the post along with the hashtag #AamirKhanProductions.

The photos from the ceremony, posted on Thursday, are now viral. They also show Aamir Khan's ex wife Kiran Rao performing aarti together with the actor. Several staff members are also seen taking part in the puja.

Earlier this week, Aamir Khan told reporters that he would return to acting after a year. The actor added that he would be spending time with his family.

"I am not doing anything. I have been working for a long time, so now I want to spend time with family. Work is underway on Paani foundation, and there are other things as well. I will come back to acting after a year," the actor said during the red carpet of Salaam Venky's premiere.

He also has a small role in the film, which stars Kajol and Vishal Jethwa in the lead.

After the premiere, Kajol posted a picture with Aamir Khan and Vishal Jethwa.

The 'Fanaa' actor took to her Instagram handle and shared a picture where she can be seen doing thumbs up with Aamir and Vishal in front of the camera.

Aamir Khan was last seen in Laal Singh Chaddha, co-starring Kareena Kapoor. The film was not well received by the audience.