A picture shared by Aamir Khan's fan club has surfaced on the Internet, where the actor is seen with a pierced nose and ear 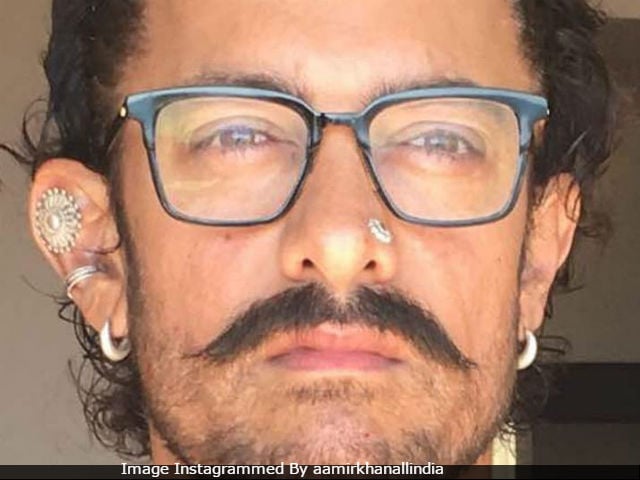 New Delhi: Aamir Khan is currently filming Thugs Of Hindostan in Malta. His co-stars Amitabh Bachchan, Katrina Kaif and Fatima Sana Shaikh have also joined the actor. Just a few weeks ago, Aamir's photograph with a crew member from the sets of the film had gone viral and now, another picture of the 51-year-old actor has surfaced on the Internet. In the picture shared by a fan club, Aamir is seen with a pierced nose and ear. Earlier in May, a picture of Aamir with Sushant Singh Rajput left Twitter confused, after the Dangal actor was seen with a pierced nose in it. Meanwhile, the caption of the recent post shared by Aamir's fan club reads, "Ear and nose piercing: #AamirKhan goes through a 'painful' transformation for #ThugsofHindostan."

Ear and nose piercing: #AamirKhan goes through a 'painful' transformation for #ThugsofHindostan.

Thugs Of Hindostan, an action drama, marks the first collaboration between Aamir and Amitabh Bachchan. Over the weekend, Big B delighted fans with a picture of himself with Aamir. "THUGS OF HINDOSTAN in a short respite from the gruelling shoot in Malta," he captioned his post.

For Thugs Of Hindostan, Aamir underwent massive physical transformation. He shed over 20 kilos for the film and returned to his regular weight - 70 kilos. For Dangal, Aamir had sized upto 95 kilos to play Mahavir Singh Phogat, the protagonist in the wrestling drama.

Promoted
Listen to the latest songs, only on JioSaavn.com
Director Vijay Krishna Acharya earlier revealed details about Thugs Of Hindostan's shooting schedule in Malta. "The set of the film is in a high security water zone, with restricted access. Both these ships have been built in the early eighteenth century style, when vessels would carry cannons and other weapons," he told news agency PTI. Aamir and Mr Acharya have previously worked together in Dhoom 3, also starring Katrina Kaif.

Thugs Of Hindostan is expected to release on Diwali next year.