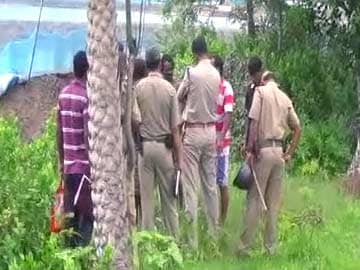 Anti-riot police is guarding the area in Bengal’s East Midnapore district where a seven-year-old’s body was found hanging from a tree.

Kolkata: A seven-year-old's body has been found hanging from a tree in Bengal.  Villagers attacked a local tantric who they suspected of assaulting her; he died in hospital today. Two of his associates who were also beaten up are in hospital.

The village where the young victim lived in Bengal's East Midnapore district is simmering with tension. Anti-riot police is guarding the area.

Villagers allege that the child, who went missing from her home last evening, was physically assaulted before she was hanged. They rounded up the tantrik and his two aides and marched them to the police station after beating them up.

India has been outraged and stunned by a series of sexual crimes and violence against children that have come to light with brute force in the last few weeks.  In May, the bodies of two teen girls were found

Promoted
Listen to the latest songs, only on JioSaavn.com
Hanging from a tree in Uttar Pradesh.  Their families allege they were raped before they were killed; local police alleges their families orchestrated an honour killing.  The case is being investigated by the CBI, which attempted to exhume the bodies this past weekend for a fresh autopsy.  But heavy rains meant the girls' graves on the banks of the Ganga were submerged under water.

A six-year-old's rape in her Bangalore school earlier this month, allegedly by an instructor who has been arrested, has fuelled a national debate on how to hold schools responsible for the safety of students.