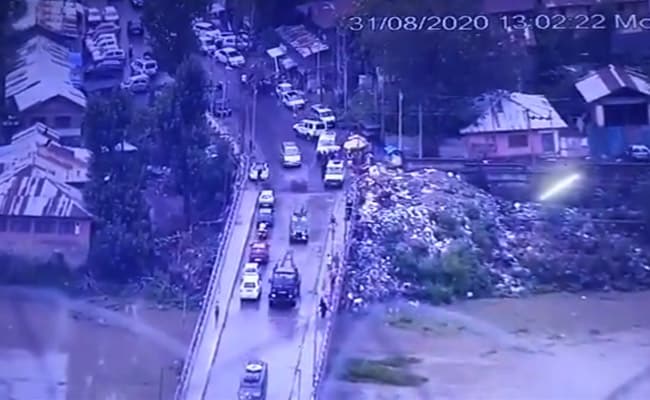 Six civilians were injured after a terrorist threw a grenade at an Army convoy in Jammu and Kashmir's Baramulla on Monday. The grenade was supposed to hit the last vehicle in the convoy but missed and exploded by the side of the road.

The injured have been shifted to a hospital and the Army has cordoned off the area, news agency ANI said. A search operation is being conducted, ANI added.

In visuals - from CCTV footage - shared by ANI, what appear to be Army trucks (two in number) and Jeeps (also two in number) can be seen crossing a bridge.

As the last vehicle in the Army convoy drives on to the bridge, a brief explosion can be heard behind it; the video also shows a small spiral of smoke and sand.

#WATCH Terrorists hurled a grenade on Army Convoy moving from Baramulla towards Srinagar, which missed the last vehicle & resulted in injuries to 6 civilians. They have been shifted to hospital. Area cordoned off & search is in progress: Indian Army pic.twitter.com/AE3SUHx9HR

After the explosion people can be seen running from the scene, while the vehicles lined up on the bridge quickly drive away. A couple of the vehicles, and a motorcycle, can also be seen engaging reverse gear and backing up off the bridge.

On Sunday a policeman died in the line of duty and three terrorists were shot dead in an overnight encounter near Srinagar.

A senior cop said the terrorists attacked a check-post in an attempt to snatch weapons. Security personnel retaliated and when the terrorists tried to escape, they were cornered in an adjacent neighbourhood.

That was the third major encounter in preceding 36 hours.

As many as 10 terrorists have been killed in J&K since Friday evening.

On Saturday, a soldier died for this country and three terrorists were killed in an encounter in south Kashmir's Pulwama.

On Friday, four terrorists were killed in an encounter with security forces in Shopian district. Police said two of the four who were killed had been involved in the kidnapping and killing of a panchayat member linked to the BJP.