The walkathon will move through sand dunes in areas like Sakhirewala, Bhuttewala, Katoch and culminate after crossing the Indira Gandhi canal in the same district, an officer-in-charge of the event said. 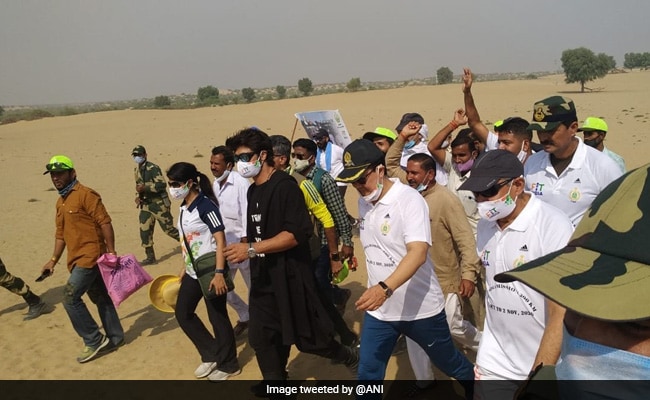 Kiren Rijiju flagged off the march from Nathuwala village along with S S Deswal and Vidyut Jammwal.

A 200-km walkathon aimed at promoting ''fit India'' was flagged off by Union Sports Minister Kiren Rijiju from a desert location along the India-Pakistan International Border in Rajasthan on Saturday as he announced that such a mega event will be held in the country in December.

The fast march is being organised by border guarding force Indo-Tibetan Border Police (ITBP) and over 100 personnel from various paramilitary forces and state police forces are taking part in the event that will conclude on November 2 in the Thar desert.

The walkathon will move through sand dunes in areas like Sakhirewala, Bhuttewala, Katoch and culminate after crossing the Indira Gandhi canal in the same district, an officer-in-charge of the event said.

"It is the dream of our prime minister that every Indian should be fit and that is why my ministry is undertaking the ''fit India'' movement. This is not only a government exercise but has become people's movement."

"In December, we are planning to hold a big ''fit India'' event across the country," the minister said.

He said the walkathon will also spread the message of integration as the day is being observed as the ''national unity day'' as a mark of respect to Sardar Vallabhbhai Patel, the first home minister of the country.

Sardar Vallabhbhai Patel was born on October 31, 1875, in Gujarat's Nadiad. He is credited with the merger of over 560 princely states into the Union of India.

"The walking marathon or walkathon aims to create awareness for a fit and healthy lifestyle among the people. This event is unique as walking in the desert is difficult but the personnel are spreading the message that the determination of ensuring a healthy and fit country and citizens is paramount," ITBP spokesperson Vivek Kumar Pandey said.

Out of the total 200 km route of the walkathon, about 53 km is in the desert area. Also, most of the route track runs along those regions of the international border that are known for India-Pak wars, the spokesperson added.

The ITBP has been at the forefront of these fitness excursions and the force and its chief have undertaken numerous such walkathons in the past.

DG Deswal has earlier participated in a 100-km walk in the Sangla valley of Himachal Pradesh, Lipulekh Pass, and Mussoorie in Uttarakhand and some other hilly areas.