Police say their preliminary investigation suggests the men are operatives of Ansarul Bangla, a terror outfit operating in Bangladeshi. 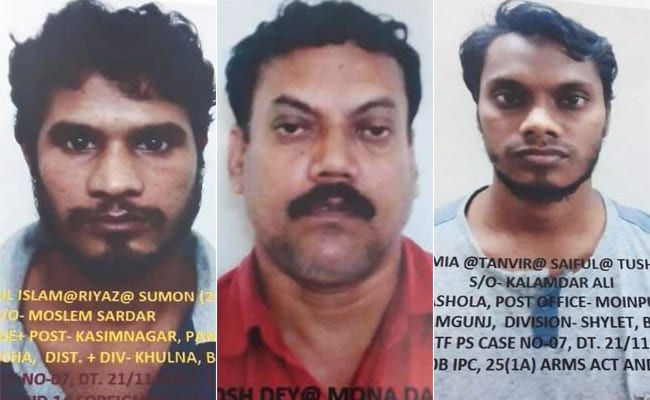 Police say they have arrested 2 Bangladeshi terror suspects and an Indian accomplice (centre) in Kolkata.

Kolkata: Two terror suspects from Bangladesh and a Bengal-based arms dealer were arrested today at the Kolkata Railway Station by the elite Special Task Force (STF) of the police. One of the Bangladeshis had a fake Aadhaar card. They had met up with the gun-runner to strike an arms deal.

Based on flash drives, papers and other seizures from the two Bangladeshis, the STF said they appear to be operatives of Ansarul Bangla, a terror outfit operating in Bangladeshi till it was banned recently.

Besides links with several murders of bloggers in that country, Ansarul Bangla is also known to have links with the Al Qaeda in the Indian Subcontinent or AQIS.

The two Bangladeshi nationals are 25-year-old Samsad Mian aka Tanvir aka Saiful of Sylhet district and 26-year old Riaz aka Riazul Islam aka Sumon of Khulna district.

Samsad Mian has a fake Aadhaar card in the name of Tushar  Biswas. Samsad claims he is a civil engineer.

Monotosh Dey, 46, is a resident of the Bashirhat area of North 24 Parganas district about 100 km from Kolkata.

A 32 mm pistol and a "one-shotter" gun were seized from the trio. Also seized, a book on how to make explosives, visiting cards of shops selling chemicals, books on how to reconnoitre an area, speeches in Bengali and English related to Al Qaeda, laptop and flash drives.

Some papers with the words 'Eden Gardens' and 'Dharmtala' - two key places in Kolkata - were also recovered from them.

"We got the central intelligence tip off just after the Durga Pujas, when preparations were beginning for the Under 17 FIFA World Cup," said Murlidhar Sharma of the STF.

Promoted
Listen to the latest songs, only on JioSaavn.com
"We immediately began surveillance in and around Kolkata. It was not easy to trace them as they did not stay in hotels or guest houses but at rail stations and bus stops most times. Four-five days ago, we narrowed down on the two Bangladeshis and caught them when they met with the arms dealer," he added.

Police will examine the seized material for a clearer idea of the motives of the suspected terror operatives. What is apparently confirmed is that the two Bangladeshis have been in India for the last 18 months but were not able to produce a passport or visa.
Comments
Ansarul BanglaBangladesh