The two soldiers were part of MONUSCO - the United Nations Organization Stabilization Mission in the DR Congo. 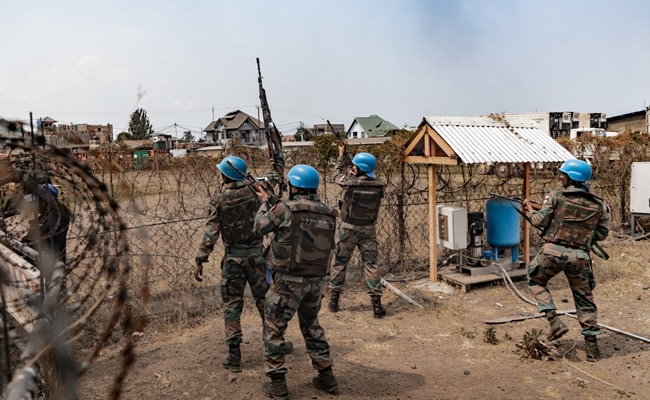 5 people were killed, 50 injured on Day 2 of demonstrations in Congo's Goma

Two Border Security Force personnel, who were part of the UN peacekeeping mission in Congo, were killed on Tuesday during violent protests, a spokesperson for the force said.

External Affairs Minister S Jaishankar said he was deeply grieved at the loss of the two valiant Indian peacekeepers and demanded that the perpetrators of the "outrageous attacks" must be held accountable and brought to justice.

The minister extended his condolences to the bereaved families.

The two soldiers were part of MONUSCO - the United Nations Organization Stabilization Mission in the DR Congo.

According to international media, at least five people were killed and about 50 others injured on the second day of demonstrations in Congo's eastern city of Goma against the United Nations mission in the country.

"On 26 July, two BSF personnel of the UN Peace Keeping Contingent (MONUSCO) deployed at Butembo, Democratic Republic of Congo succumbed to fatal injuries during the violent armed protests," a spokesperson for the border force said.

Officials said about two platoons or around 70-74 BSF troops were deployed in the area that was inducted in May this year.

They said locals had given a call for demonstration and agitation against MONUSCO throughout Congo and the situation turned violent in Goma (about 350 km South of Beni and a big MONUSCO base) with protesters looting and setting fire to UN property.  Both Beni and Butembo (with two BSF platoons each deployed) were on high alert. Monday passed off peacefully, a senior officer said.   However, today the situation in Butembo turned violent. The camp of Morroco Rapid Deployment Bn where BSF platoons are stationed was surrounded by demonstrators.

Congolese Police (PNC) and Congolese Army (FARDC) troops arrived but could not control the crowd estimated to be over 500 people.  BSF and other security force troops fired tear smoke ammunition to disperse the crowd but they managed to breach the perimeter wall at three different places.

"The crowd was repelled but they gathered again. There were reports that armed rebels had infiltrated the demonstrators," the officer said.

Taking to Twitter, Mr Jaishankar said, "Deeply grieved at the loss of lives of two valiant Indian peacekeepers of the BSF in the Democratic Republic of Congo. They were part of the MONUSCO."

"The perpetrators of these outrageous attacks must be held accountable and brought to justice."