18th IIFA Awards 2017: About his exhausting rehearsal schedule for IIFA, Shahid told NDTV: "It's a picnic for you. We are busting our a$# on stage rehearsing, trying to make it a good night. It's a huge platform, it's a huge award night and the pressure's on the actors" 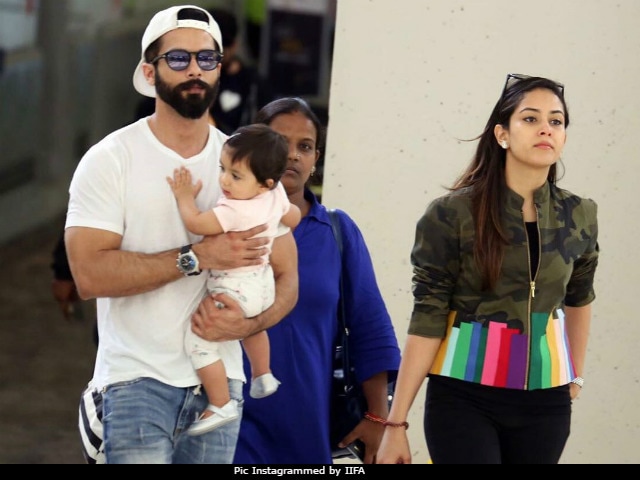 New Delhi: The 18th edition of the International Indian Film Academy (IIFA) awards saw many celebrities fly in to New York. Among them is Shahid Kapoor, whose daughter Misha will celebrate her first birthday on August 26. Shahid is known to be a family man and also a devoted actor. Shahid, who will perform on the IIFA stage on July 15, flew to the Big Apple along with wife Mira Rajput and daughter Misha and has planned to celebrate Misha's first birthday in New York, reports mid-day. Till July 15, the day of the main event, Shahid's roster is packed with rehearsal schedules after which, it'll just be family time for Shahid. The party birthday party is planned for some time after July 15, reports mid-day "Shahid will host a party kick-starting the celebrations of Misha's first birthday," mid-day quoted a source as saying.

About his exhausting rehearsal schedule for IIFA, Shahid told NDTV: "It's a picnic for you. We are busting our a$# on stage rehearsing, trying to make it a good night. It's a huge platform, it's a huge award night and the pressure's on the actors."

"I really give it my best when it comes to IIFA because I feel the warmth beneath. It's a great platform, it's an international platform. You are performing to a new audience almost every time," he added. Shahid also shared details of the lunch plan he has lined up with Alia Bhatt on Saturday.


The IIFA is expected to wrap with an after party on June 16, soon after which Shahid will take Misha and Mira on a tour of NYC. Meanwhile, Shahid has also already invited Karan Johar and his Shaandaar co-star Alia Bhatt to the party. "From the film fraternity, Shahid has invited Karan Johar and Alia Bhatt for the do. Shahid will also spend the next few days showing Mira and Misha around," mid-day quoted the source as saying.

Promoted
Listen to the latest songs, only on JioSaavn.com
Back home, the actor has been keeping busy with the shooting schedule of his new film Padmavati - the reason why he will also be vacationing with Misha and Mira when in New York. "It was a surprise for everyone when Mira and Misha were seen accompanying Shahid to the awards show. With the gruelling schedule of Padmavati, he hasn't been able to spend much time with his family. So, Shahid decided to make a holiday out of this work trip," the source told mid-day.

Shahid Kapoor arrived in New York earlier this week and was at the IIFA press conference and IIFA Stomp on Thursday. Last seen in Rangoon, he co-stars with Deepika Padukone and Ranveer Singh in Sanjay Leela Bhansali's Padmavati.