18th IIFA Awards 2017: Shahid Kapoor is in New York City with his wife Mira Rajput and daughter Misha. Though Shahid is busy with rehearsals and promotional events, the doting dad is making sure to make the most out of this outing with Mira and baby Misha 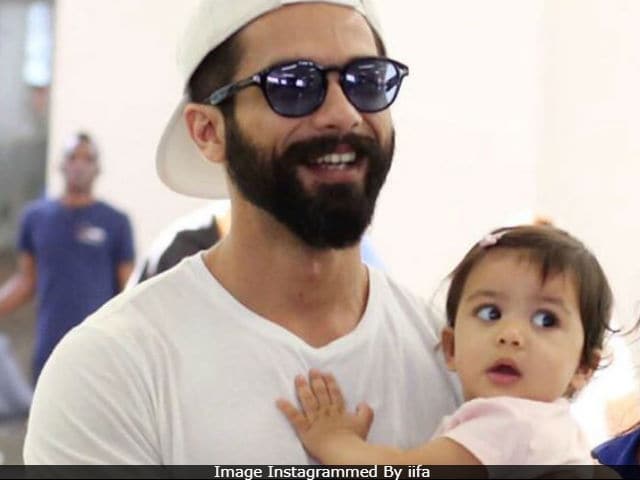 New Delhi: Actor Shahid Kapoor is in New York City with his wife Mira Rajput and daughter Misha to attend the 18th edition of the International Indian Film Academy (IIFA) awards. Though Shahid is busy with rehearsals and promotional events, the doting dad is making sure to make the best most of this outing with Mira and baby Misha. Shahid is keeping Instagram followers posted about his Big Apple moment. However, his latest post with Misha caught our attention. On Friday, Shahid Instagrammed a Boomerang video with Misha. In the clip, Misha, who is cradled in Shahid's arms, plays with his shades while the actor's expressions... (You need to watch the video for that). "Breakfast sugar rush," Shahid, 36, captioned his post.

The Kapoor family arrived in New York for the IIFA awards on Wednesday. It was Misha who stole away the limelight from her parents at the airport with her cute expressions. IIFA's official Instagram account posted some pictures of the Kapoors while they landed in New York. Here they are.

Shahid Kapoor will be performing at the IIFA awards (July 15) while he is also nominated in the Best Actor category for playing a drug-addicted rockstar Tommy Singh in Udta Punjab. "I really give it my best when it comes to IIFA because I feel the warmth beneath. It's a great platform, it's an international platform. You are performing to a new audience almost every time," Shahid told NDTV.

Promoted
Listen to the latest songs, only on JioSaavn.com
Meanwhile, Shahid and Mira have reportedly planned to host a birthday party for Misha in New York. Misha will turn one on August 26. After fulfilling his IIFA commitments, Shahid will be touring around New York with Mira and Misha. "Shahid will host a party kick-starting the celebrations of Misha's first birthday. From the film fraternity, Shahid has invited Karan Johar and Alia Bhatt for the do. Shahid will also spend the next few days showing Mira and Misha around," mid-day quoted a source as saying.

IIFA awards will wrap with an after party on July 16. Salman Khan, Katrina Kaif, Alia Bhatt, Varun Dhawan, Karan Johar and Shilpa Shetty are among the other stars who are attending the IIFA awards.