15 coaches of 12987 Sealdah-Ajmer Express derailed near Rura, 70 km from Kanpur in Uttar Pradesh

Over 40 people have been injured after 15 coaches of the Sealdah-Ajmer Express derailed near Kanpur in Uttar Pradesh this morning.

Eight of the passengers brought out of the wrecked coaches are believed to be in a critical state, confirmed senior police officer Zaki Ahmed..

In dense early morning fog, the coaches of the 12987 Sealdah-Ajmer Express went off track when the train was crossing a bridge over a dry canal, nearly 70 km from Kanpur. Two coaches toppled off the bridge and fell into the canal bed.

The accident took place around 5.20 am. The cause is not known yet.
A passenger said he was woken up by a loud bang. "Our coach tilted to one side. I jumped out and saw a few coaches were derailed," Rizwan Chaudhary told Associated Press. 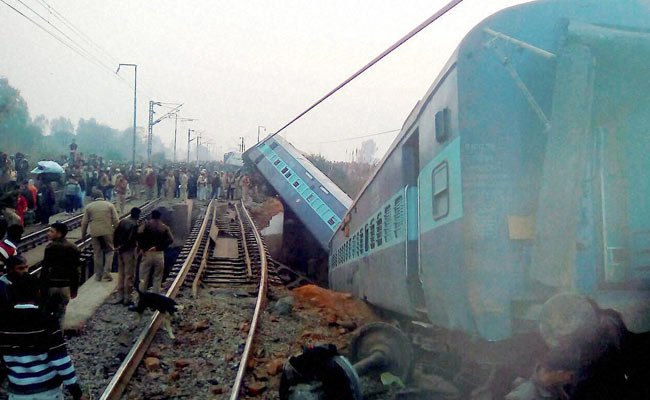 All the passengers have been brought out of the derailed coaches

A medical relief train from Kanpur has been sent to the accident site. "Currently we are focusing on relief and rescue operations," Railway spokesperson Anil Saxena told reporters.

Javeed Ahmed, Uttar Pradesh's top police officer, said all the passengers have been brought out of the derailed coaches. Television images showed coaches lying on their sides.

Promoted
Listen to the latest songs, only on JioSaavn.com
"Thorough investigation will be carried out to ascertain the cause," Mr Prabhu said in another tweet, adding that he was personally monitoring the efforts.

This is a second rail accident in the region in two months. On November 20, nearly 150 passengers were killed in their sleep and nearly 200 injured after the Indore-Patna Express train slid off track near Kanpur.