The incident, captured on camera, showed policemen in riot gear and armed with guns and sticks chasing and attacking protesters and even firing shots. 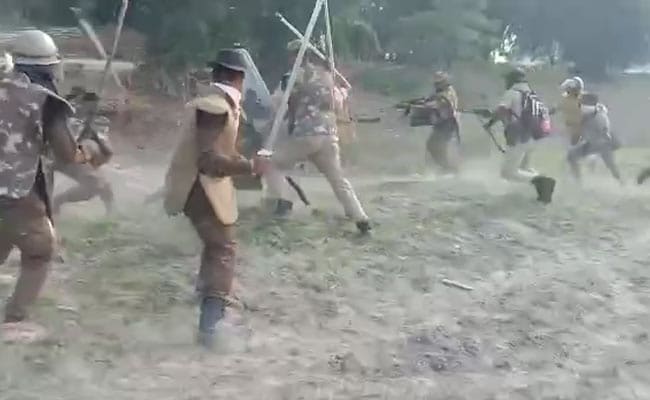 A 12-year-old is among the two civilians killed earlier this week when an anti-encroachment drive in Assam's Darrang district blew up into a brutal clash between the police and people protesting eviction.

The incident, captured on camera, showed policemen in riot gear and armed with guns and sticks chasing and attacking protesters and even firing shots.

Shakh Farid was returning home after collecting his Aadhaar card from the local post office when he was caught in the brawl.

Since July, the boy had been called several times from the post office to collect his Aadhaar card, said one of the family members.

Some 800 families were evicted in the drive against encroachments at Dholpur on Monday. The state wants to repossess 4,500 bighas of government land for an agricultural project.

Farid's family claims it is yet to receive eviction notice.

The youngest of four siblings, Farid's house is barely two kilometres from the place where the battle between the villagers and police took place on Thursday.

The police said local people attacked them with stones and they had to use force.

"While returning he saw lot of people in the protest, he stood there as bystander and when police opened fire he was hit. The police fired at him from the front; he took a bullet in his chest and died on the spot," Rafiqul Islam, a family relative, told NDTV.

Reports say the government decided in June to repossess the land for a farming project and had served notices to alleged encroachers.

The other person killed in the violence was Moinul Haque. Dressed in vest and lungi, videos showed he was charging at the police with a stick when he was savagely attacked at Dholpur village - shot, thrashed and stomped upon to death.

In horrifying visuals, a government cameraman filming the clash attacked him, who had earlier followed him with a stick.

As he lay motionless on the ground, a government cameraman kept attacking him until he was restrained. The police have arrested the cameraman.

The state government has ordered a probe - to be headed by a retired High Court judge - into Thursday's violence.