Ivanka Trump landed in Hyderabad at about 3 am last night. Tonight, Prime Minister Narendra Modi will host Ms Trump, who is also an informal adviser to her father Donald Trump, for dinner at Falaknuma Palace 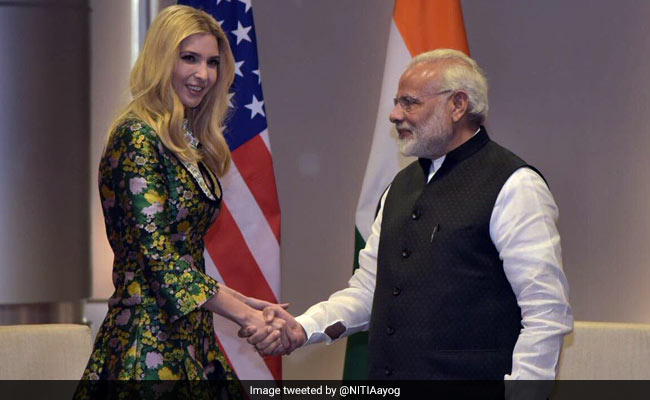 Hyderabad: Ivanka Trump, daughter of US President Donald Trump, met Prime Minister Narendra Modi in Hyderabad on the sidelines of the Global Entrepreneurship Summit, which they will inaugurate in a short while from now. Ms Trump, who is leading a 350-strong US delegation, also met Foreign Minister Sushma Swaraj.

Ms Swaraj said they had a productive discussion on women entrepreneurship and empowerment.

"People of India inspire us all," said Ivanka Trump as she addressed the GES 2017. Ms Trump also thanked PM Modi, saying, "Thank you PM Modi for joining us today for making India a symbol of democracy and beacon of hope for India."

Hyderabad has rolled out the red carpet for Ms Trump, with about 10,000 policemen standing guard. Billboards with pictures of Ivanka Trump dot many parts of the tech city, home to major US firms such as Microsoft. Authorities have taken beggars off the streets in a clean-up drive.

Preparations for Ivanka Trump's visit have included traffic restrictions and a beefing up of the numbers of closed-circuit cameras. On standby are sniffer dogs as well as "spotters", or men trained to detect any suspicious activity or people, a senior police officer told Reuters, reflecting the trappings of a visit by a state leader.

As political and economic ties expand, India has become a major market for the United States, with two-way trade of about $115 billion last year. 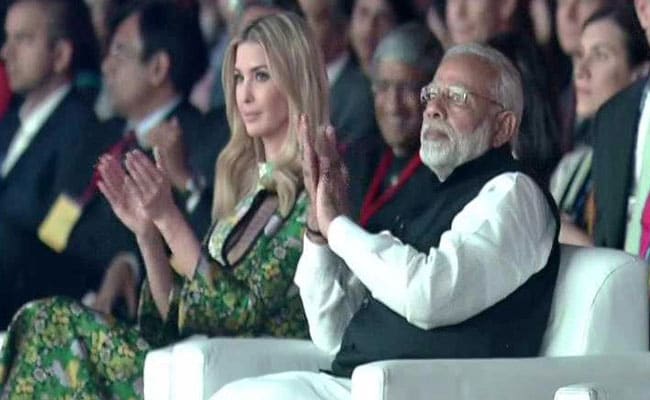 Ms Trump landed in Hyderabad at about 3 am last night. PM Modi had invited Ivanka Trump to India during his visit to the White House in the US earlier this year. Tonight, PM Modi will also host Ms Trump, who is also an informal adviser to her father, for dinner at Hyderabad's Falaknuma Palace.

"Global eyes are on Hyderabad today. We are representing India," said Jayesh Ranjan, a government official helping to organise the summit, an event conceived by former US President Barack Obama, and jointly hosted by India and the United States.

Promoted
Listen to the latest songs, only on JioSaavn.com
The organisers of the summit, to be attended by 1,500 entrepreneurs and investors from 150 countries, were overwhelmed with thousands of applications, officials said. This year, women are the theme of the gathering, and more than half the participants are women, with all-female delegations representing several countries, including Afghanistan, Israel and Saudi Arabia.

Atif Bin Arif, a bus tour operator who travelled from Pakistan, said he wanted to explore collaboration opportunities on tourism in India, and was keen to hear Ivanka Trump. "I am interested in what Ivanka Trump has to say," Mr Arif said. "I also want to know her reason for coming to Asia for this summit. Does she see this as a land of opportunities?"