The special train carrying the heart harvested from a 45-year old left Nagole at around 4 pm and reached Jubilee Hills, in less than half-an-hour, breezing through the stretchof 21 km and crossing 16 stations, the L&T Metro Rail (Hyderabad) Limited said in a release. 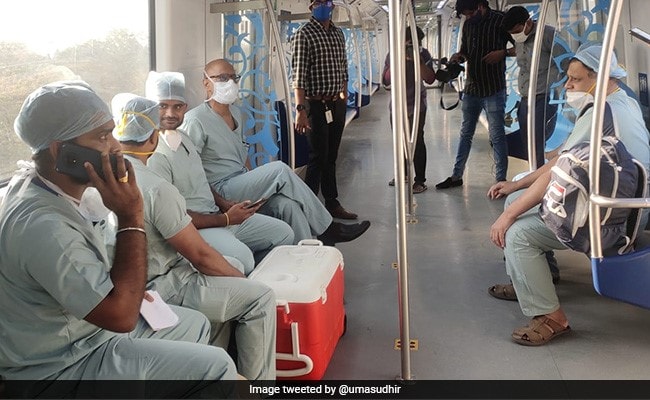 For the first time, a heart harvested from a brain dead man for transplant in a needy patient was transported in a metro train in Hyderabad on Tuesday with the Hyderabad Metro Rail creating a green corridor for 21 km between two city stations, officials said.

The special train carrying the heart harvested from a 45-year old left Nagole at around 4 pm and reached Jubilee Hills, in less than half-an-hour, breezing through the stretchof 21 km and crossing 16 stations, the L&T Metro Rail (Hyderabad) Limited said in a release.

An ambulance kept ready at the Jubilee Hills station took the vital organ to the Apollo Hospitals, where it would be transplanted in a 44-year old man.

When @HydMetroRail showed it has a #heartofgold & carried a heart more precious than gold non-stop in less than 30 min over 21-km #GreenCorridor between Nagole & Jubilee Hill from Kamineni Hosp, LB Nagar to save patient admitted at #ApolloHospital, Jubilee Hills @ndtv@ndtvindiapic.twitter.com/khQhyfcWX5

"Kudos to Hyderabad Metro Rail for making every heartbeat matter. In a first, a special passenger-free green corridor enabled a train to cover 21 kms in 30 mts to transport a liveheart between two hospitals to save a precious human life," he tweeted.

The donor, a farmer from Nalgonda district, suffered acute hemorrhagic bleeding and was declared brain dead at the Kamineni Hospital. After his family decided to donate his organs, the heart was harvested, the Apollo hospital said in a release.

It would give a new lease of life to the patient at the Apollo Hospitals where he was admitted in a critical condition about a month and half ago with severe heart failure.

He was kept alive with continuous infusion of medicine, while scouting for a cadaver heart, the release said.

Dr AGK Gokhale of Apollo Hospitals, leading a team in the complex transplant surgery, thanked both the Metro Rail and the city police for the excellent support extended by organising a "green metro corridor" and enabling the seamless transportation of the heart in the quickest possible time, it said.

"We are always at the service of people and this was a God send opportunity for us to mobilise our resources towards saving a precious life. I must thank Kamineni and Apollo Hospitals for reaching out to us with this benevolent request," said L&TMRHL Managing Director and Chief Executive Officer KVB Reddy.

Green corridors had been created for transport of organs through roads in the past.