The woman's father reportedly called the newlyweds for conciliatory talks and attacked them with a machete. 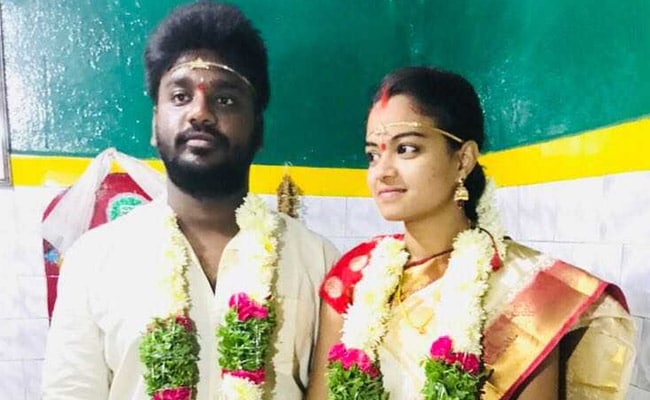 The couple got married on September 12.

A 49-year old man who carried out a savage attack on his daughter and her husband for marrying without his consent has been arrested. The woman whose forearm was severed while trying to save her husband was in a critical condition at a hospital, police said.

A video of the incident, close on the heels of an alleged dishonour killing in Telangana's Nalgonda district, has gone viral. The incidents have triggered public outrage. Police have now asked TV channels not to show videos of the two incidents, saying they are "likely to provoke violence".

The man, V Manohar Chary had fled the scene after brutally attacking his 20-year old daughter Madhavi and son-in-law Sandeep with a sickle. He was arrested within hours, police said.

Doctors attending to the woman said the forearm was cut and they were fixing and rejoining the nerves. "Her condition remains critical.... She is responding to treatment, but is on ventilator support," a doctor said.

They said she would continue to remain under observation for next 2-3 days and only after that they will be able to say if she was out of danger.

On September 16, Madhavi's parents had gone to Sandeep's house and asked her to come home but she refused.  The accused had asked the couple to come to Erragadda on Wednesday afternoon, saying he wanted to talk to them.

When Sandeep and Madhavi were about to leave, the father suddenly drew the sickle and attacked his son-in-law even while his daughter tried to stop him, the official said.

During interrogation, he told the police that he was angry that his daughter married without informing him and had refused to come.

"He bore a grudge against his daughter and decided to kill her and Sandeep... he attacked them in an inebriated state," inflicting injuries on both, the DCP said.

With videos of the incident here and at Nalagonda being aired on TV channels, police asked  media to desist  "in the interest of the society".

It asked the channels to adhere to the 'Programme Code' prescribed under Cable Television Networks (Regulation) Act 1995.

"It is observed that certain TV Channels have been telecasting content consisting of gory scenes of violence repeatedly in the name of honour killings, which is likely to provoke violence leading to further such incidents," state Director General of Police M Mahendar Reddy said in a release.