This Hyderabad Man Feeds The Poor Daily, Says, "Hunger Has No Religion"

Azhar Maqsusi extended the free food initiative to other places like Bengaluru, Raichur, Tandoor, and parts of Jharkhand and Assam. 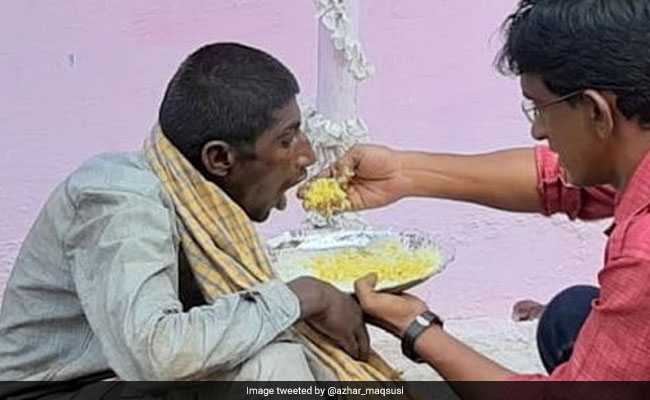 Around 1,200 people are fed under free food distribution programme run by Azhar Maqsusi.

Azhar Maqsusi, a social activist from Hyderabad, has made it his life's mission to reach out to the poor and provide them free food. He can be spotted feeding the underprivileged outside the city's Gandhi General Hospital and Dabeerpura area every day. He arranges food for around 400 people in the city daily, he said.

Childhood days for Mr Maqsusi were hard. "My father died when I was four years old. There were many days when my family and I used to sleep hungry," he recalled.

"One day, I saw a woman struggling for food. By that time I had started working, so I purchased food for her. That was the day when I prayed to God to show me a way to help poor people," Mr Maqsusi told ANI.

Mr Maqsusi said that he started distributing free food seven years ago from whatever money he had. After three years, more people joined in and started helping him out with groceries. "I then extended the programme and started distributing free food at Gandhi General Hospital four years ago. Three to four hundred people eat food at Gandhi Hospital and Dabeerpura area daily," he added.

Jagdeesh, a labourer, said, "On days when I don't get any work and I don't have money, I come here for food."

Slowly, Mr Maqsusi extended the free food initiative to other places like Bengaluru, Raichur, Tandoor, and parts of Jharkhand and Assam.

"Around 1000-1200 people are fed daily under our free food distribution programme.  I want to extend this further. I am contented to help the poor," Mr Maqsusi said.