Anushka Panda (15), a student of Sun City school in Gurgaon, is suffering from spinal muscular atrophy. She had recently topped the CBSE Class 10 board examination in the disabled category with 97.8 per cent marks. 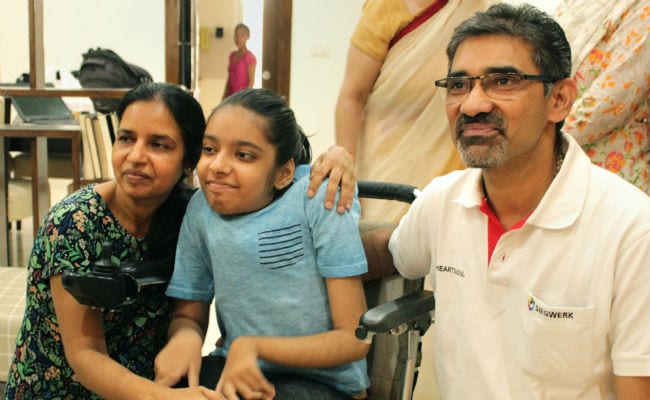 Anushka, who has opted for the science stream, aims to get into the IIT and become a software engineer.

A differently-abled girl from Gurgaon was ecstatic after Prime Minister Narendra Modi mentioned her achievement in his monthly radio programme, "Mann Ki Baat", on Sunday.

Anushka Panda, 15, a student of Sun City school in Gurgaon, is suffering from spinal muscular atrophy. She had topped the CBSE Class 10 board examination in the disabled category this year with 97.8 per cent marks.

Her parents said she was suffering from the genetic disease since childhood and that she had to move on a wheelchair.

When PM Modi said Anushka should be a role model for other students, the 15-year-old girl could not believe it. She said the encouraging words of the prime minister motivated her to achieve future goals.

"I came across the news of Gurgaon's specially-abled daughter Anushka Panda, who is suffering from a physical condition called spinal muscular atrophy. Anushka did not let her disability deter her from becoming an all-India topper," PM Modi said on "Mann Ki Baat".

There were a lot of specially-abled students and those from poor families who did not let their adverse situation become a hindrance in the path of their success, he added.

Citing various examples of such students, PM Modi said, "They proved that with determination and hard work, any milestone can be achieved."

Anushka's mother Archana Panda said the disease her daughter was suffering from robbed people of physical strength by affecting the motor nerve cells in the spinal cord, thereby weakening the ability to walk.

"The prime minister himself will congratulate me on my board results. I am thankful to him for his kind encouragement and motivation," Anushka said.

Rupa Chakravarty, principal, Sun City school, said, "She (Anushka) is an inspiration for all of us. The focus she possesses is rare to find. What she has achieved is an example for the other students. Her tenacity and power of resilience are something all of us should learn from."

Anushka, who has opted for the science stream, aims to get into the IIT and become a software engineer.