Third Tourist Dies After Collapsing At Sunburn Festival In Goa

On Friday, two tourists from Andhra Pradesh collapsed after feeling uneasy while standing outside the festival venue. 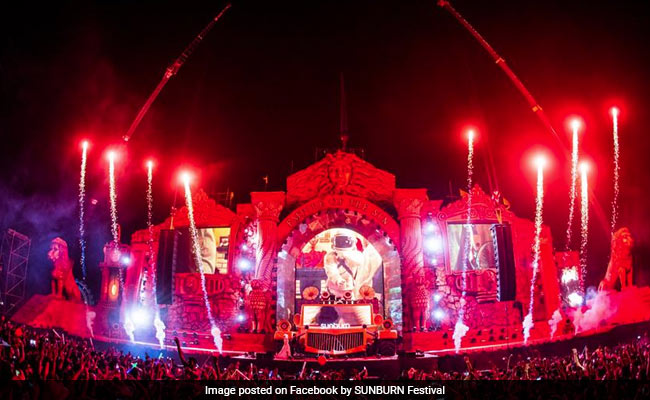 The total number of tourist deaths has gone up to three.

A tourist, who arrived in Goa to participate in the Sunburn Electronic Dance Music (EDM) Festival, died after feeling uneasy near the event venue, police said on Monday.

With this, the total number of tourist deaths in the last three days after collapsing at the EDM festival venue has gone up to three.

On Sunday night, a visitor from Bengaluru, Sandip Kotta, complained of "extreme uneasiness" at the festival venue at Vagator beach in North Goa district, a senior police official said.

"An ambulance was called at the venue and he was rushed to a state-run hospital in Mapusa town where he died minutes after admission," he said, adding that the man's age was not yet known.

On Friday, two tourists from Andhra Pradesh collapsed after feeling uneasy while standing outside the festival venue. They were taken to a hospital where doctors declared them dead, police earlier said.

Goa BJP leader Rajendra Arlekar on Monday wondered whether such festivals were required for the promotion of tourism.

"Do we really need events like Sunburn to promote tourism? Can we not redefine our priorities in this sector?

Let's ponder...," the former minister tweeted. The three-day Sunburn festival concluded on Sunday with lakhs of music lovers attending it.

The Congress on Sunday claimed drug overdose could be the reason for the death of two tourists from Andhra Pradesh at the Sunburn festival, and it indicated the sale of narcotics at the venue.

The state police, however, said no case of drug use or sale has been detected at the festival venue.

The Congress demanded that permission for the annual EDM festival be revoked and an inquiry be conducted.