COVID-19 Goa: Goa's Health Minister said these fatalities occurred between 2 am and 6 am "which is a fact", but remained evasive about the cause. He however, admitted that there was a shortfall in the supply of medical oxygen at the Goa Medical College and Hospital as of Monday. 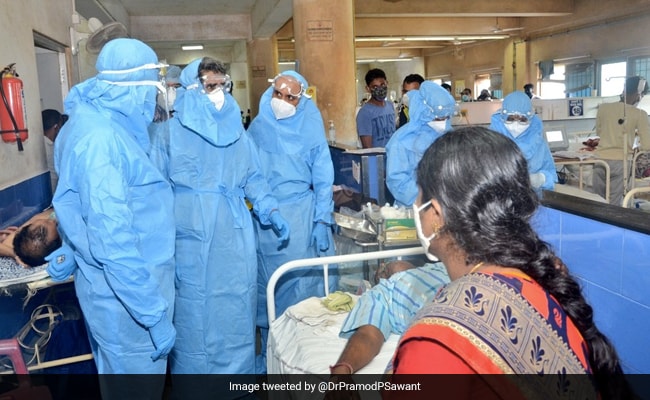 Goa Health Minister Vishwajit Rane today said 26 COVID-19 patients died at the state-run Goa Medical College and Hospital (GMCH) in the early hours and sought an investigation by the High Court to find out the exact cause.

He said these fatalities occurred between 2 am and 6 am "which is a fact", but remained evasive about the cause.

Goa Chief Minister Pramod Sawant, who visited the Goa Medical College and Hospital, said the gap between the "availability of medical oxygen and its supply to COVID-19 wards in the GMCH might have caused some issues for the patients" even as he stressed that there is no scarcity of oxygen supply in the state.

Speaking to reporters, Mr Rane admitted the shortfall in the supply of medical oxygen at the Goa Medical College and Hospital as of Monday.

"The high court should investigate the reasons behind these deaths. The high court should also intervene and prepare a white paper on oxygen supply to the GMCH, which would help to set the things right," the state Health Minister said after Chief Minister's visit to the hospital.

Mr Rane said the medical oxygen requirement of the facility as of Monday was 1,200 jumbo cylinders of which only 400 were supplied.

"If there's a shortfall in the supply of medical oxygen, the discussion should be held about how to bridge that gap," he said.

Mr Rane said a three-member team of nodal officers set up by the state government to oversee COVID-19 treatment at Goa Medical College and Hospital should give its inputs about the issues to the Chief Minister.

Earlier in the day, the Chief Minister wore a PPE kit and visited the COVID-19 wards at Goa Medical College and Hospital where he met patients and their relatives.

Will be holding a meeting with the medical and administrative team to resolve all the issues and to ensure that everyone gets necessary facilities. 2/2

"There are issues over the availability of oxygen in these wards which need to be sorted out," the Chief Minister said. He announced the setting up of a ward-wise mechanism to ensure a smooth supply of medical oxygen.

"Doctors, who are busy treating patients, cannot spend their time in arranging logistics like oxygen. I will hold a meeting immediately to set up ward-wise mechanisms to ensure that oxygen is supplied to patients in time," Mr Sawant told news agency Press Trust of India.

The Chief Minister said there was no dearth of medical oxygen and cylinders in the state but the problem arises sometimes as these cylinders do not reach their destinations on time.

Mr Sawant said the state government is making efforts on all fronts to tackle the pandemic.

"We have abundant supplies of (medical) oxygen. There is no scarcity in the state," he said.

He said the pending financial dues on part of private hospitals under this scheme will be cleared in the next 15 days.

Minor Oxygen Leakage At A Hospital In Goa, No Casualty: Police