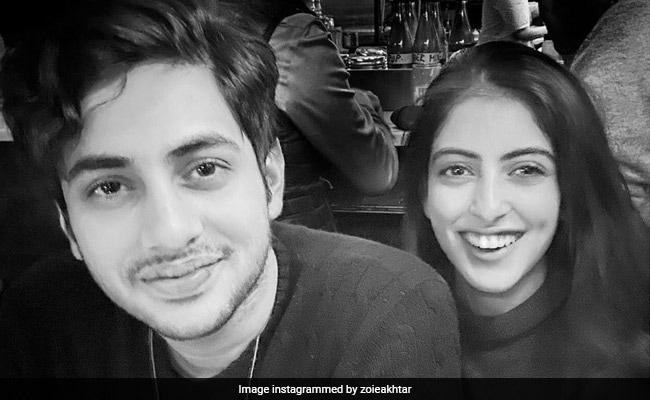 Navya Naveli and Agastya in a rare click (courtesy zoieakhtar)

Shweta Bachchan's daughter Navya Naveli and son Agastya featured in an adorable photo on Zoya Akhtar's Instagram. From the filmmaker's caption, it appears that Zoya is currently in New York and so are Navya and Agastya. So, she took them out on a dinner date last night. Making a fairy-tale reference to sibling duo Hansel (brother) and Gretel (sister), Zoya introduced Agastya and Navya as "Hansel and Gretel" and added these in the hashtags: "Happy puppies" and "Night out in NYC." The reason behind Navya and Agastya's happy faces were explained by Shweta Bachchan Nanda, who in the comments section wrote: "Hahaha, Hansel and Gretel love it. Thank you for feeding them." Shweta also wrote the most mom-like thing ever: "Hope they behaved." Shweta Bachchan and Zoya Akhtar are childhood friends.

Navya and Agastya, who study abroad, make frequent appearances on Shweta Bachchan's Instagram and sometimes in throwback posts as well.

Miss you much sweethearts

Talking about throwback, here's how Zoya Akhtar, Shweta Bachchan and Abhishek Bachchan looked like on a "70's Sunday".

Shweta Bachchan Nanda is an author and designer. She made her debut as an author with fictional novel Paradise Towers last year. She has also launched a fashion label named MxS in collaboration with designer Monisha Jaising.

Meanwhile, Zoya Akhtar's Gully Boy is India's official entry for Oscars 2020. She had also directed hit films such as Dil Dhadakne Do and Zindagi Na Milegi Dobara and web-series like Made in Heaven and Lust Stories.