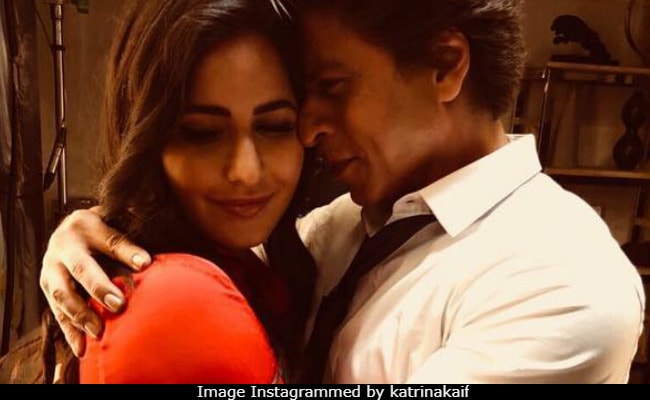 New Delhi: I scream, you scream, we all scream for ice cream! But now, we are slightly at a loss for words after a new photo of Shah Rukh Khan and Katrina Kaif popped up on our feed. Sharing a photo from the sets of Zero, which Shah Rukh and Katrina are currently filming, the actress wrote: "Ice cream ke baad." The backstory of the photo goes like this: Over the weekend, Shah Rukh Instagrammed a photo of Katrina claiming Katrina's health-conscious diet does not include ice cream. Hours later, Katrina shared a story on Instagram, in which she wore a slightly agitated expression on her face while Shah Rukh appeared to be explaining something to her. "Expression before ice cream," said the caption on the story (which is not available on her feed any longer) And now, this.

This is what Shah Rukh had posted earlier with a reference to his 1993 movie Darr.. in which he played an obsessive lover. "Cos she doesn't eat ice cream in real, Cos she has worked so hard & cos this reminds me of Darr...on @aanandlrai #Zero the film...'I lov u kkkKatrina.. (sic)," wrote Shah Rukh.

Cos she doesn't eat ice cream in real, Cos she has worked so hard & cos this reminds me of Darr...on @aanandlrai #Zero the film...'I lov u kkkKatrina..' @katrinakaif

Social media exchanges between Katrina and Shah Rukh, with posts centering around Zero, have been going on for a while now. Shah Rukh has even admitted to appointing Katrina as his "media manager." This is what he posted after an early morning shooting schedule on Zero sets.

When the company is sooo scintillating & exciting that u can't keep ur eyes open! Serves them right for calling me to early morning shoots for #Zero ( Pic courtesy: @katrinakaif my media manager )

I took this pic in colour on the way to @aanandlrai #Zero shoot. It's taken so long in traffic, the colours have faded...

My media manager strikes again!! @katrinakaif extremely disturbed with my last dark selfie took it upon herself to rectify my photography game. Here is a sample of her amazing love for taking pics & keeping us all so entertained on the sets.

Promoted
Listen to the latest songs, only on JioSaavn.com
Here's one of Shah Rukh from Zero sets. Photo courtesy Katrina Kaif.

Aanand L Rai-directed Zero, also stars Anushka Sharma with Shah Rukh and Katrina - the trio are co-stars of 2012 movie Jab Tak Hai Jaan. Shah Rukh Khan plays a dwarf in the movie, which is slated to hit screens in December this year.