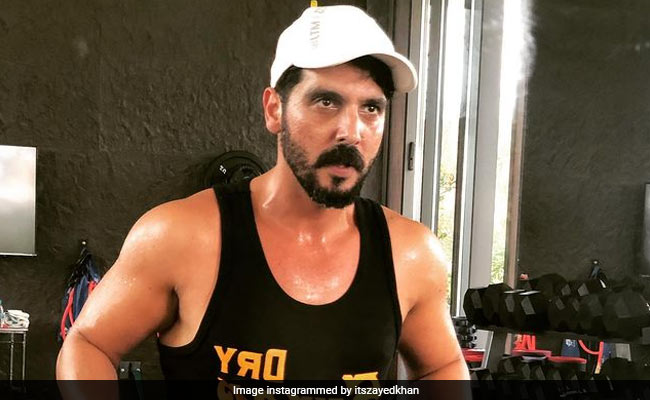 Actor Zayed Khan occupied a spot on the list of trends on Sunday, courtesy his major physical transformation. The 41-year-old actor, on his birthday eve, shared a post-workout photo of himself and it shows that he underwent a major body transformation in the last few months. In his post, Zayed Khan also thanked his mentor and ex-brother-in-law, actor Hrithik Roshan, for helping him with his physical transformation. Zayed Khan wrote: "The sun will shine again. So don't give in, don't sell out, perceiver. For pain will only cleanse. Sometimes it's unbearable I know, I feel that too. And sometimes it's just not worth going through. But remember god tests those more, who can handle pain, and come out on the other side Stronger, Braver more resilient. Truth is that we will never have all the answers and the irony is we never really had to.

"It's time we forgive each other and ourselves. It's time we become Warriors not Parasites! I know this couple of years has been tough on all of us but our country needs us more then ever. We must pick ourselves up, dust ourselves off and move forward together. Hand in hand, shoulder to shoulder and believe that GOOD EXISTS! Trust me my friends it does we just have to give it and honest chance, and I'm sure we will, you will, and everyone will. Big shout out to brother I take great pride in saying is my mentor Hrithik Roshan, thank you! JUST KEEP MOVING FORWARD!" he added.

Reacting to Zayed Khan's post, his sister and interior designer Sussanne Khan commented: "Looking fab on your birthday eve, my darling Zai." Hrithik and Sussanne Khan divorced in the year 2013.