Workout With Katrina Kaif Can Be 'Hazardous' For Health (Or Not), Per Sonakshi Sinha 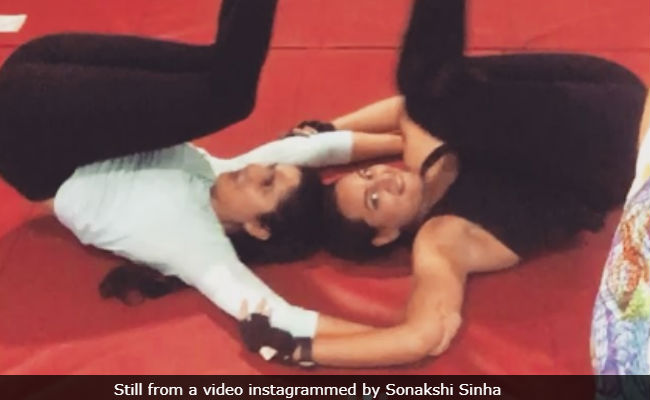 Katrina and Sonakshi during a workout session. (Image courtesy: Instagram)

Dear Katrina Kaif, many of your colleagues are complaining about you being difficult in the gym. After Alia Bhatt, actress Sonakshi Sinha instagrammed snippets of her workout session with Katrina Kaif and she wrote: "Statutory warning: working out with Katrina Kaif and Reza Katani is hazardous to health (or possibly quite the opposite)." In the short video we can see Katrina and Sonakshi going through rigorous floor exercise routines under the watchful eyes of Reza Katani, a celebrity fitness trainer, who also coaches Ranbir Kapoor and Sidharth Malhotra. Reza Katani was also the fitness expert on the sets of Salman Khan's Tiger Zinda hai.

Sonakshi Sinha shared these videos with her Instafam of 10.6 million followers:

Statutory warning: working out with @katrinakaif and @rezaparkview is hazardous to health (or possibly quite the opposite)

Like we said before, Sonakshi isn't the only one who has complained about Katrina's meticulous ways during gym hours. Alia Bhatt knows what happens when Katrina takes over the gym instructor's duty. Katrina shared a glimpse of what happened when fitness trainer Yasmin Karachiwala didn't turn up:

Katrina Kaif is a fitness enthusiast and even Salman Khan vouches on that. During the promotion of Tiger Zinda Hai, Salman described Katrina's exhaustive workout routine to NDTV and it was indeed unbelievable. "It was all very tiring because where we shot it was like 50 to 55 degree Celsius. After shooting all day, she would play cricket for an hour and volleyball for an hour. She would do pilates and then workout in the gym. She learned to play tennis too, so an hour-and-a-half would be spent on tennis. Five to six hours she would just be at it and we wondered where she'd get that kind of energy from," he said.