Alia Bhatt's Workout Regime Is Tough (Even Without Katrina Kaif) 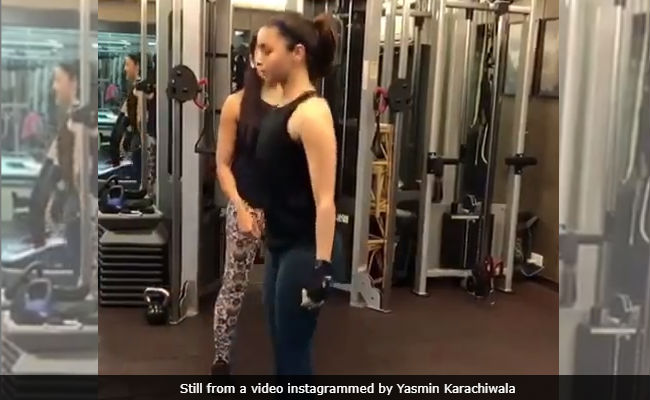 New Delhi: Did you just skip your weekend workout routine? Well, this video of Alia Bhatt rounding up her weekend excise should make you feel guilty. Alia Bhatt's roll on floor Pilates move will soon get you in workout mode. The 24-year-old actress has been quite busy over the weekend - attending award show and et al - but still she managed to fix up a time with celebrity trainer Yasmin Karachiwala for a Pilates session. She shared the aforementioned video and captioned it: "This is how Alia Bhatt rolls into weekend mode."

Also, Thank God, Katrina Kaif was not around this time to make Alia Bhatt's workout hours hell. Remember this happened when Yasim was away and Alia thought Katrina could compensate for the trainer's absence:

Alia Bhatt, who was last seen in Badrinath Ki Dulhania, is awaiting the release of Meghna gulza-directed Raazi. The film is expected to release in early 2018 and it also co-stars Vicky Kaushal.

Currently, Alia Bhatt is simultaneously preparing for Gully Boy with Ranveer Singh and Brahmastra, co-starring Ranbir Kapoor and Amitabh Bachchan. Brahmastra is a trilogy, which will be directed by Ayan Mukherji and produced by Karan Johar. Gully Boy will e directed by Zoya Akhtar.

Clearly, Alia Bhatt has a lot on her plate. All the best!
Comments
alia bhattkatrina kaifalia pilates