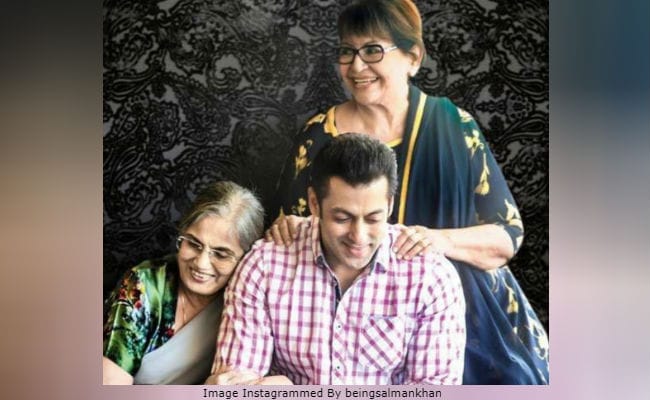 Salman Khan's post on Women's Day came up this evening and it quickly won the Internet. In Salman's post, his mothers Salma Khan and Helen have been photographed with the superstar and he simply captioned it: "Happy Women's Day," adding a heart emoticon. The adorable picture features Salman sitting beside Salma Khan, who holds him while Helen is seated behind them. The post got close to 2 lakh likes within minutes of sharing it and celebs such as Priyanka Chopra, Sonam Kapoor, Anil Kapoor, Bobby Deol and others have also liked it. Salman's father Salim Khan married Salma Khan in 1964. Salman, Arbaaz, Sohail and Alvira Agnihotri are their children. Years later, in 1981, Salim Khan married actress Helen and they later adopted Arpita.

Salman is one of the most successful actors of the film industry. His brothers Arbaaz and Sohail are also actors, filmmakers. Alvira is married to actor-filmmaker Atul Agnithori, who is producing Salman's upcoming film Bharat. Arpita Khan Sharma is married to actor Aayush Sharma, whom Salman launched in the industry last year.

On the work front, Salman Khan recently completed shooting for the aforementioned film Bharat, which also stars Katrina Kaif, Disha Patani, Jackie Shroff, Sunil Grover and Nora Fatehi. A part of Bharat is set in the circus during the Sixties and Salman plays the role of a daredevil stunt artiste. Bharat is directed by Ali Abbas Zafar and releases this Eid.

Salman is expected to soon start filming Dabangg 3 with Sonakshi Sinha. It will be the third film in the hit Dabangg franchise and will be produced by Arbaaz Khan.