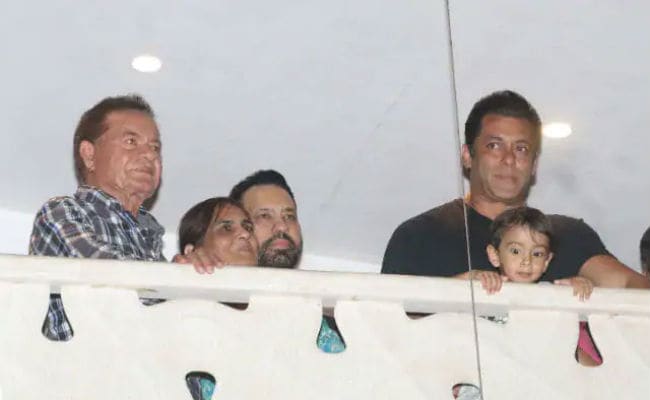 Superstar Salman Khan recently opened up about the 'instruction' his father Salim Khan gave to him and his brothers about their girlfriends. News agency IANS reports that on 10 Ka Dum, Salman discussed with his guest how 'sad' it is to see couples being beaten up by the police for spending time at parks and other public places and revealed that Salim Khan had given his children the permission to 'spend time at home' with their partners. "These couples are helpless as there are around 8-10 people in a small house. These youngsters cannot afford to book a hotel as the society takes it in other way. My father gave me a clear-cut instruction when it came to girlfriends. He gave us the permission to spend time at home rather than roaming around the city," IANS quoted Salman as saying.

Salman Khan, 52, has reportedly dated stars like Sangeeta Bijlani, Aishwarya Rai Bachchan and Katrina Kaif. He is currently rumoured to be dating Romanian TV presenter Iulia Vantur, who is pretty much a fixture by his side. Katrina and Iulia appear to be close to the Khan family and have often been pictures at their private parties.

"The same instruction was applicable to my sisters as well. If they have any good man in their life, they should first tell their parents and not hide anything from them. He has given us the right to take the decision on whom to marry and whom not to marry," Salman added.

Salman has two brothers Arbaaz and Sohail. Arbaaz was married to actress Malaika Arora while Sohail is married to designer Seema Khan. His sisters Alvira and Arpita are also married. Alvira's husband is actor-filmmaker Atul Agnihotri while Arpita is married to Aayush Sharma, whom Salman is launching in Bollywood with Loveratri.