Salman Khan, who has been sentenced to 5 years in jail for blackbuck poaching case, reportedly roped in Iulia Vantur to sing a song in Race 3 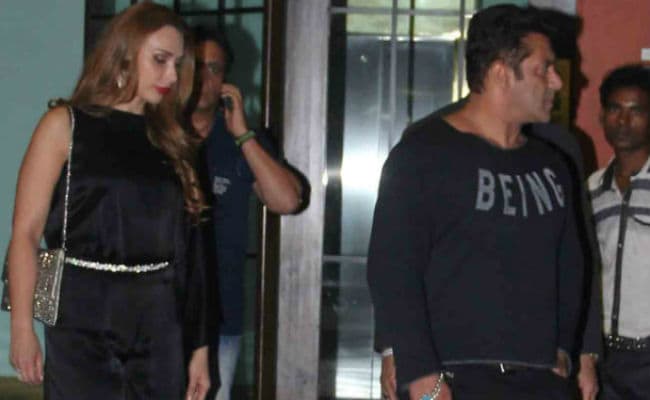 Salman Khan and Iulia Vantur photographed together in Mumbai

New Delhi: Superstar Salman Khan, who has been sentenced to five years in jail for 1998 blackbuck poaching case, had reportedly roped in rumoured girlfriend Iulia Vantur to sing a romantic number in his forthcoming film Race 3. Mumbai Mirror reported that Iulia will sing a duet with Pakistani singer Atif Aslam, who recently provided playback for Salman's Tiger Zinda Hai song Dil Diyan Gallan. "It was on Salman's suggestion that she was brought on board. The team was looking for a female voice who fit the bill and he thought Iulia was perfect for the vocals," a source told Mumbai Mirror. The song was picturised on Salman in Abu Dhabi, where team Race 3 was recently shooting.

Iulia Vantur, 37, is a Romanian TV presenter and debuted in Bollywood as a singer. She recorded her first song, titled Every Night And Day, with music composer Himesh Reshammiya some months ago. Salman and Iulia have reportedly been dating for some time now but have never admitted to a romance.

The Mumbai Mirror report also stated that Salman, 52, had written the song a while ago and when he shared it with Race 3 team, they loved it so he gifted it to them.

Race 3 is the third film in the franchise. The previous two Race films were headlined by Saif Ali Khan and directed by Abbas-Mustan.

From the court, Salman Khan has directly taken to the Jodhpur Central Jail and will have to appeal to a higher court for bail.

Promoted
Listen to the latest songs, only on JioSaavn.com
Meanwhile, the remaining parts of Race 3 are yet to be filmed. Jacqueline Fernandez, Anil Kapoor, Bobby Deol, Saqib Saleem and Anil Kapoor are Salman's Race 3 co-stars. The film is directed by Remo D'Souza and is expected to hit the screens this Eid.

Besides Race 3, Salman has Bharat and TV show 10 Ka Dum in the pipeline.