"Wish I Could Go Back In Time": Sushant Singh Rajput's Sister Shweta Shares Glimpses Of The Actor From Her Wedding Album

"In some realm, we will always be together," wrote Shweta 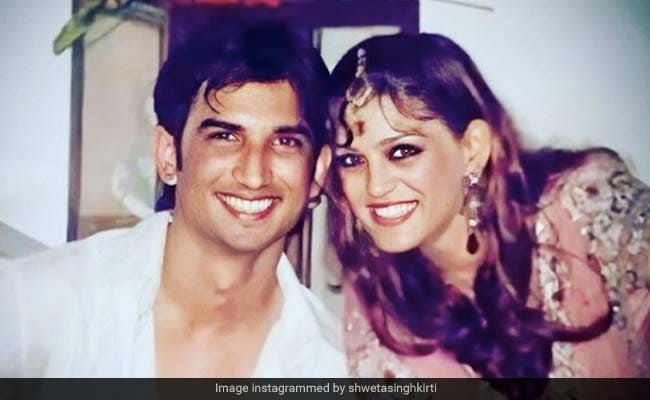 Remembering her brother Sushant Singh Rajput, Shweta Singh Kirti shared glimpses of the actor from her wedding diaries on Tuesday. Mr Rajput, 34, died in Mumbai on June 14. Shweta shared a photo from her sangeet ceremony and a video from her wedding reception and accompanied them with heart-warming notes for her brother. The picture from sangeet ceremony shows the brother-sister duo happily posing for the camera. "In some realm, we will always be together... #GudiaGulshan," she captioned the post. Sharing a screengrab from her wedding reception video, Shweta recalled how she and Sushant "hugged and cried" the day before the function.

"Bhai at my wedding reception, giving me a hug. I remember a day prior to the reception how we had hugged and cried, I wish I could just go back in time," she wrote and shared the link of the full video, which also features Sushant's father KK Singh and his brother-in-law Vishal Kirti. In the clip, Sushant Singh Rajput can be seen wearing a black kurta and a dupatta.

In some realm, we will always be together... #GudiaGulshan. I will try and find video from my Sangeet and upload it.

https://youtu.be/4eA_GpnEIpI Bhai at my wedding reception, giving me a hug. I remember a day prior to the reception how we had hugged and cried, I wish I could just go back in time.

Shweta Singh Kirti frequently shares throwback pictures and videos of Sushant Singh Rajput from their family album. Earlier this month, she posted a clip, in which the actor can be seen having a lot of fun with his sisters. "How I wish we were all together again," read her heart-breaking caption.

"We had joy, we had fun!We had seasons in the sun But the smile and the song Like the seasons have all gone" How I wish we were all together again... #Youwillstayinourheartsforever #comeback

On Raksha Bandhan, Shweta dug out priceless pictures of Sushant celebrating the festival with his sisters and wrote: "You were, you are and you will always be our pride."

In July, Shweta posted a throwback picture of Sushant from his childhood. She wrote a lengthy note for him, an excerpt of which read: "We were always time together. We played, danced, studied, did all sorts of mischiefs, ate, slept, did everything together so much so that people forgot we were 2 separate individuals. They even called us 'Gudia-Gulshan' as if we were a single entity (Bhai's nick was Gulshan and mine Gudia)."

Part 1: I am experiencing bouts of pain. Right when I think I am coping with it better, some or the other incidence rushes right back into my memory and breaks me apart. One such memory I am sharing with you all... because it is said that the more you share your grief, the less it hurts. I have always been told by my family members that Mom and Dad wanted a son, more so because Mumma's first child was a son and she had lost him at the tender age of one and half. I never got to meet my first sibling. But mom and dad were very hopeful for a second son.... they made a sankalp (mannat) and started praying to Maa Bhagwati for straight 2 years. They fasted, they meditated, they did puja, hawan and went to spiritual places and met spiritual people. But then I was born, on a Diwali day.... Mumma considered me very lucky and often called me Lakshmi Ji. They continued with their Sadhna, and a year later my little brother was born. Right from the beginning he was a charmer, he mesmerized everyone with his beautiful smile and twinkling eyes. So, this little one was my "Pithiya". This is a term used in colloquial Hindi to signify the one who comes right after you. Mumma believed that I was the cause of his much-desired arrival into our lives and I accepted the honor whole heartedly. I was very protective about my little brother because I felt I was responsible for bringing him to this earthly plane. We were always time together, We played, danced, studied, did all sorts of mischiefs, ate, slept, did everything together so much so that people forgot we were 2 separate individuals, they even called us "Gudia-Gulshan" as if we were a single entity (Bhai's nick was Gulshan and mine Gudia) And when we started going to school, we had to go to different classes. Bhai's Nursery and my prep classes were in same building so we managed our 1st year of school pretty well. But then my UKG class was in a different building and his prep classroom remained in the same building, so we got separated. One day after lunch break was over I saw Bhai in my classroom, in my building. We were just 4/5 year olds then. #BhaikikahaniBehankizabani #Downthememorylane #LuvuBhai

Sushant Singh Rajput was found dead in his Mumbai apartment on June 14. His death is being investigated by the Central Bureau of Investigation (CBI). Sushant's last film Dil Bechara released last month and was showered with a whole lot of love from fans. Sushant worked in many movies such as Kedarnath, Chhichhore, Raabta, Kai Po Che! and MS Dhoni: The Untold Story.