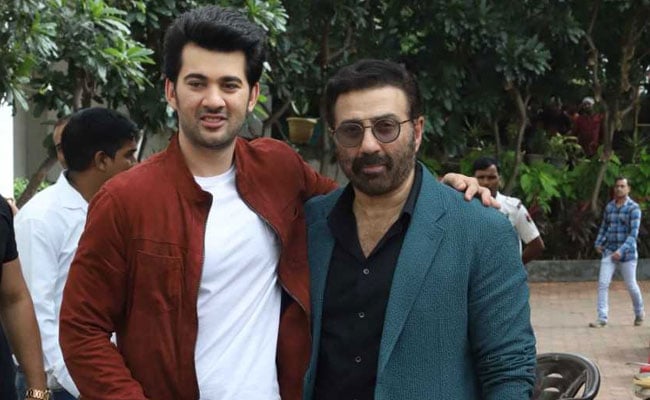 Actor Sunny Deol, who is all set to launch his son Karan Deol in upcoming film Pal Pal Dil Ke Paas come September 20, told news agency IANS that he's not a fan of 'remakes' and added that he would not like to see his son play any of his iconic characters in a remake. Sunny Deol said that the 'people still remember him for those roles' and it won't be easy for any actor to 'justify' doing the same thing in a remake. Sunny Deol told IANS, "I would not like to see my son in any such roles... Those films were made at a time that was different from the present. People still remember me for those roles. If you do the same thing with any other actor and set it in a different atmosphere, then it will not be easy to justify it."

Sunny Deol is directing Pal Pal Dil Ke Paas, in which Karan Deol is cast opposite newcomer Sahher Bambba. Speaking about deciding to direct the movie, Sunny Deol said people think that it's easy to get a good director onboard but the 'reality is different.' He said, "For my son's film, I tried my level best to get the best of directors. People think we can get the best (names onboard) in no time. The reality is different."

Pal Pal Dil Ke Paas has a small connection to Karan's actor grandfather Dharmendra too. The film borrows its title from a song in Dharmendra's 1973 film Blackmail. Talking about the perils of coming from a family of established actors, Sunny Deol said, "Being an actor's son, obviously everybody will look at him (Karan) keeping in mind his grandfather, his father and his uncle. We can't remove that from people's minds. The younger generation, who is our target audience, may not know us well and view Karan in a different way," said Sunny.

Sunny Deol also told IANS that he doesn't think about the audience drawing parallels between Karan and Sunny Deol or Karan and Dharmendra. "There is no solution to it. I can't stop them (the audience) from doing so. This is the reality and he (Karan) has to face it. He has to go through it. If he can create his space with his talent, they will stop identifying him only as Sunny Deol's son," the Gadar actor said.