Pal Pal Dil Ke Paas has been directed by Sunny Deol and is produced by Dharmendra. Karan Deol co-stars with Sahher Bambba in the film 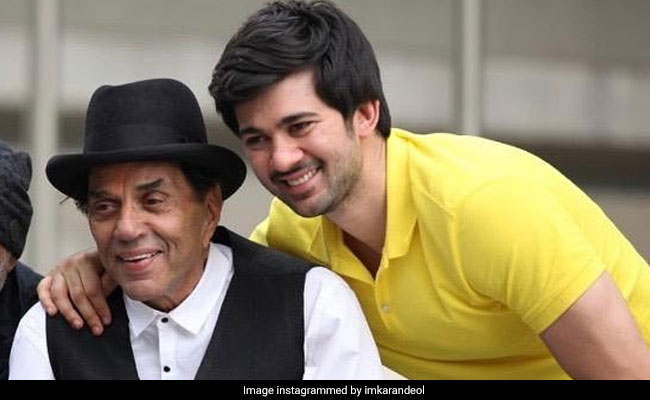 Sunny Deol's 27-year-old son Karan Deol, who is making his Bollywood debut with Pal Pal Dil Ke Paas later this month, shared a behind-the-scenes story from when Dharmendra decided to pay him a surprise visit on sets. Speaking to news agency IANS, Karan Deol said that he was filming a car sequence when he suddenly spotted Dharmendra on sets, engrossed in watching the shoot: "I was shooting for a car scene for the film and suddenly I saw bade papa standing near me. I was so shocked. I didn't know he would be at the set. I immediately stepped out of the car and walked up to him."

Karan added that the first thought that came to his mind is whether Dharmendra "approved" of his acting skills and said that he heaved a sigh of relief with after Dharmendra's response: "In my mind, I was worried if he had seen my shot and if he approved of it. When I asked him, he replied, 'Don't worry, you are doing everything fine'. I felt relieved."

Talking about how "supportive" Dharmendra has been towards him, Karan Deol added that he is eagerly looking forward to his "bade papa's" review of Pal Pal Dil Ke Paas because that's what "matters the most". "Bade papa has always been very sweet, loving and supportive. His approval matters the most to me," IANS quoted Karan Deol as saying. Karan Deol's movie gets its title from the song Pal Pal Dil Ke Paas from Dharmendra's 1973 film Blackmail.

When Sunny Deol announced Karan Deol's Bollywood debut in 2017, Dharmendra gave his grandson a massive shout-out: "He has confidence and I want him to fly with his confidence. I wish he gets successful in his career and life," the veteran actor had told news agency IANS. However Sunny Deol, who directs Karan Deol in the movie, is of the view that he may be launching his son in the industry but Karan Deol will take charge of his own career graph now onwards: "When I came in the industry was I mentally prepared? I am sure he is coming in his own way the way I came in. Rest is up to him - how he portrays himself, the subjects he chooses, how he does the job and that is all up to him," PTI quoted him as saying.

As a father I am nervous at the same time I am proud to present my sons first poster. Today @imkarandeol begins his cinematic journey ,wishing him love ,luck and success.Presenting to you #PalPalKePaas starring Karan Deol and @sahherbambba @aapkadharam #ShariqPatel @zeestudiosofficial #SunnySoundsPrivateLtd

Pal Pal Dil Ke Paas has been produced by Dharmendra. It is Sunny Deol's third movie as a director. Karan Deol co-stars with Sahher Bambba in the film, which also marks her acting debut.